Phoenix AZ- Today, September 14, 2020, marks 19 years since Jesse Florez vanished while walking to a party in Phoenix, Arizona, at just 14 years old. The National Center for Missing & Exploited Children (NCMEC) and the Phoenix Police Department in Arizona are hoping this year’s missing date will bring in new tips to help give Jesse’s family answers as to what happened on that evening so many years ago.

Jesse’s mom, Angie Alvarado, says that around 6:00 pm on the evening of September 14, 2001, her son got dressed up and said he was going to a party within walking distance from the family’s home. Angie had told him to be home early that night, and he said he would. But Jesse never made it home. His family soon reported him missing and the search for Jesse has been underway ever since. Investigators believe Jesse may have never made it to a party and could have disappeared en route.

“We had an extensive search,” said Angie. “It was in the media quite a bit in that first year, in both English and Spanish. We put NCMEC’s poster all over the place, but there was still nothing to go on.”

Jesse’s family is hoping that today’s missing mark will help put Jesse’s face back out in the media and help garner new leads from the public.

“He is still missing,” said Angie. “We’re still looking for him. Any type of information would be appreciated. His mom misses him.” 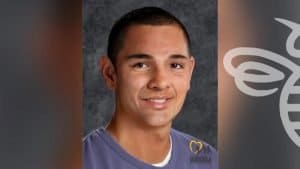 Jesse’s mother is available for interviews, which can be arranged by contacting [email protected]

When he was last seen, Jesse was 4’11 and 120 lbs. He is Hispanic, with brown hair and brown eyes. He has a piercing in the lower lobe of his left ear and a piercing in the cartilage of his upper left ear. Jesse has “J” tattooed on his hand between his thumb and index finger. He has a black mole in the corner of his right eye.