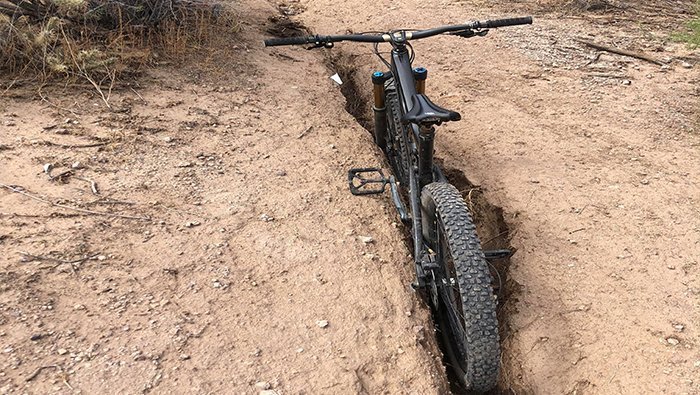 KINGMAN – A major mountain bike race has been shifted a month after major damage to the Cerbat Foothills Recreation Area trails on Oct. 3 after a storm dumped unexpected amounts of rain in parts of Mohave County.

The 2018 Rattler Race was canceled as of Oct. 10 and has since been rescheduled for Nov. 17 while members of the Colorado River Area Trail Alliance work with the City of Kingman and Bureau of Land Management to repair parts of approximately 35 miles of the Monolith Gardens, Camp Beale Loop and other trails. The race was scheduled for Saturday, Oct. 20, but massive rainfall destroyed thousands of hours of hard work by CRATA volunteers, BLM and other cyclists. Subsequent rains this week aren’t helping.

“’Ravaged’ is the best way to describe it,” said Ed Mann, CRATA member and mountain biker who has ridden nearly every trail and, since 2012, led a team of volunteers to fix and maintain them.

The City of Kingman Parks Department and BLM are assisting with repair efforts this week in hopes of helping CRATA reschedule the race and ensure the trails are rideable for the thousands of locals and tourists that seek the solitude and serenity sitting just below Kingman’s western skyline.

CRATA posted the cancelation notice on their Facebook page Oct. 9.

“It is with much regret that the Rt 66 Rattler Race has been cancelled. Our local trails were devastated with the rain we received from the hurricane. We have spent the past several days searching for a way to avoid cancelling. Unfortunately, we were not able to find an area with a suitable course for the Rt 66 Rattler. Please know that if you have already registered you will receive an email and a refund,” it noted. “Thank you and we are looking forward to next year.”

The storm, remnants from Hurricane Rosa, dumped more than 2.5 inches of rain in or near parts of Kingman in only a few hours. Mann and other trail riders were nervously monitoring rainfall the minute it started, especially with the potential for flood damage and the Rattler Race weeks away.

“We were asking each other ‘Who’s going to be the first to go out and assess the damage’,” Mann said. “Many of those riders are also volunteers who’ve worked tens of thousands of hours combined, often beginning their work in the early weekend hours. They bike their tools and treats to the worksites, which can be a few hundred meters from the trailheads to a few miles in and hundreds of feet in elevation up.”

The work is slowly paying off.

The 2018 event had been expanded to include nearly another 90 riders, their supporters, more spectators BLM, MCSO and City of Kingman participation.

The Kingman Gateway Arch was designated the start and finish line for the Rattler Race and registration was to take place in Metcalfe Park.

“Events like this bring visitors to downtown Kingman to visit all of the great restaurants and shops, and learn, what we already know about Kingman,” said Parks Supervisor Mike Meersman via email. “That it’s a great place to live.”

That didn’t stop a group of bikers from hitting trails while they were still wet. Riding in the mud leaves a rut. Once the sun dries the mud, the ground practically turns into concrete making rail repairs more work intensive and making rides difficult and annoying. Most of the trails are narrow and surrounded by sharp volcanic rock, cactus, thorns or steep drop-offs into a wash.

“Those ruts are going to lock you in,” Mann said. “They limit the options of where you can ride.”

The City of Kingman and the BLM began repairing trails within 48 hours after the storm. Not just to expedite the schedule of the Rattler Race, but to ensure trail users from near and far still have a place to safely tread.

The City of Kingman has had a solid working relationship with CRATA and BLM for several years planning trail improvements in the area.

“The trails have improved in large part to the volunteer hours of the CRATA members, Kingman BLM Outdoor and Recreation Planner Matt Driscoll and the staff at the BLM Kingman field office,” Meersman said. “We have all worked together on the White Cliffs trail project that is in the works.”

The city’s parks maintenance crew is concentrating on the Fort Beale Loop trails, the BLM crew on the Monolith Trails and CRATA volunteers on all trails.

“Safety is the number one concern on the trails,” Meersman said.

CRATA has high hopes for the local trial systems.

Eventually they’d like to see a link between the White Cliffs, Camp Beale and Monolith Gardens trails and ultimately the Hualapai Mountains, making it the premier trail system in Northwest Arizona luring bikers, hikers and tourists to the community.

“All our area trails will have a growing impact on the economy in the Kingman area,” Meersman said.

If that system comes to fruition, it could include 50 to 100 miles of biking, hiking, and equestrian trails. The nearest matching trail system is in Prescott, which hosts The Whiskey Off-Road race, a three-day bike-themed festival which includes music, food and drinks. That festival adds millions of dollars to the Prescott economy each year.

“You know who’d like to see a few million dollars,” Mann asked. “The Kingman economy.”

A Rattler Race reschedule hasn’t been confirmed but repairing and preserving the trails is still a priority.

Mann is worried negative impressions of the current state of CFRA spreading online.

“I’d hate to see someone come out to ride and then post on Yelp or something that the trails are trashed,” he said. “This is part of our reputation.”
He’s more than happy to see the community and multiple government organizations work together.

“If I could grab a megaphone, I’d tell the entire town of Kingman thanks for your respect and help on these efforts,” Mann said.

For more information on the trails and Rattler Race, check out Colorado River Area River Alliance on Facebook. Details on CFRA and a downloadable trail map can be found at http://www.gokingman.com/attraction-Cerbat-Foothills-Recreation-Area. 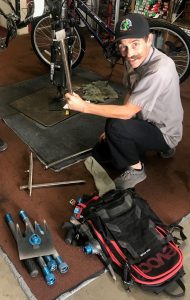 Ed Mann shows his backpack full of trail tools. The pack weighs about 40 pounds with the tools, water, snacks, two cans of Guinness, a chair and umbrella. (CONTRIBUTED/Aaron Ricca) 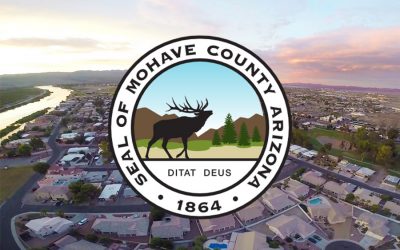 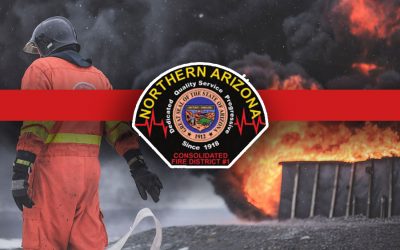