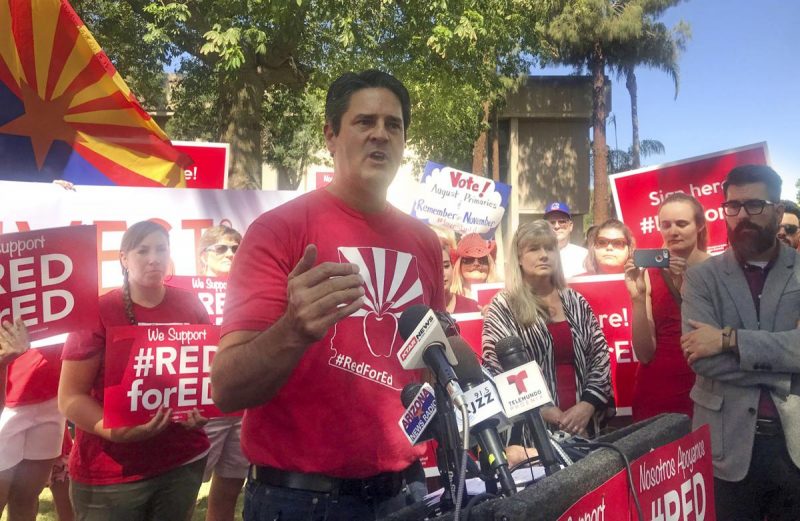 PHOENIX (AP) — Arizona voters could have multiple ballot initiatives to weigh in on this November over energy, education and elections.

Thursday was the deadline for proposed ballot initiatives to file the hundreds of thousands signatures necessary to put a question on the ballot. Three groups of organizers trucked boxes full of petitions to the state Capitol.

The signatures still have to processed and verified. The Arizona Secretary of State’s office has 20 days to complete petition processing. Then counties have 15 days to verify signatures, followed by another three days for the Secretary of State to determine if the initiative qualifies.

Here’s a look at what’s been filed:

Invest in Education Act–A measure to hike income taxes on Arizona’s wealthiest residents to fund public education needed to collect more than 150,000 signatures in support in order to qualify for the ballot. Organizers said Thursday they filed 270,000 signatures collected over six weeks. Many of the signature-gatherers were the same teachers who went on a six-day walkout this spring to demand increased pay and school funding. Those efforts ended when the state passed a plan to give 20 percent raises to teachers over three years. But activism pressed on through Arizona Educators United, a grassroots group that co-organized the Red for Ed walkouts, which held multiple events to promote the Invest in Ed initiative. The measure would bring in an estimated $690 million for public education by increasing income taxes to 8 percent for individuals who earn $250,000 a year and households earning more than $500,000, with the new higher rate applying only to income earned above those marks. Individuals earning more than $500,000 and households earning more than $1 million would pay 9 percent above those cutoffs —a rate that would be among the top five highest tax rates in the nation.
Arizona’s business lobby has come out strongly against the plan. The Arizona Chamber of Commerce and Industry created the Arizonans for Great Schools and a Strong Economy opposition initiative. Jamie Molera, chairman of that group, says the Invest in Ed proposal would harm small businesses.

“Weakening our economy will mean fewer dollars for schools, not more,” Molera said in a statement.

Arizona Education Association President Joe Thomas said he thinks “independent-minded” voters will back the plan, citing overcrowded classrooms and teachers who still are among the lowest paid in the nation.

“We have a deep problem, and this doesn’t fix everything,” Thomas said. “This is another step in the right direction.”

Clean Energy for a Healthy Arizona–Backers of a proposal to mandate increased usage of renewable energy filed more than 480,000 signatures to get the Clean Energy for a Healthy Arizona initiative on the ballot — more than double what was required. The measure would require electric utilities to provide at least 50 percent of their annual retail sales of electricity from renewable sources by 2030. Such sources would be solar, wind or hydropower, and they don’t include nuclear energy or energy derived from fossil fuels. The initiative already is facing opposition from the Arizona Public Service Co., the state’s largest utility, and others who say the initiative will cost customers, a fight that’s likely to get more intense and expensive between now and November.

Outlaw Dirty Money–Organizers of a proposed constitutional amendment that seeks to increase transparency around money in politics filed more than 285,000 signatures. The Outlaw Dirty Money initiative asks voters to approve a constitutional amendment that would require anyone spending more than $10,000 on elections to disclose everyone who contributed $2,500 or more, regardless of whether their contributions passed through any intermediaries. The measure would also empower the Citizens Clean Elections Commission to enforce the disclosure requirements. That nonpartisan entity currently handles candidates who run for office using public financing and other election duties.

The Protect Arizona Taxpayers Act–The Citizens for Fair Tax Policy Committee on Tuesday said they filed more than 400,000 for their initiative, another constitutional amendment. This proposal would prohibit sales taxes from being added to services. That campaign is supported by the Arizona Association of Realtors, who say that the measure will help protect their members and customers from possible increased taxes.

Photo contributed by The Associated Press

← Prev: One Injured In Watercraft Accident At Davis Camp Next: Crime Watch 7/4-7/6 →