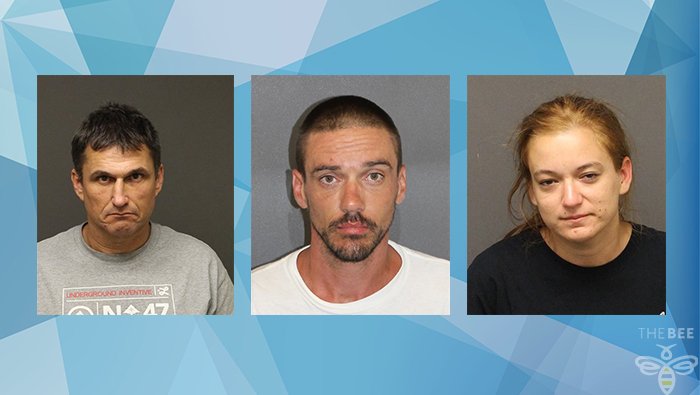 Bullhead City Police spokeswoman Emily Fromelt said police were driving in the area of Ramar Road when they recognized a male subject, along with another male, take off running when they reportedly saw the police vehicle.

The one subject was identified as Rocky Everett Gant, 35, of Bullhead City. Police apprehended the second male after locating him crouched down reportedly hiding in a backyard.

At first, said Fromelt, the male gave police a fake name and allegedly had a fake identification card on him. A search also revealed around 11 grams of marijuana, under an ounce of methamphetamine, drug paraphernalia and makeshift keys.

Police later identified him as Anthony David Bartolini, 48, of Bullhead City. Gant’s girlfriend, Samantha Lee Willis, 27, was contacted at the location as well.

Fromelt said officers observed in plain view mail that was reportedly stolen from the 1600 block of Mohave Drive. The mail was from the inside of a multiple-residential mailbox location. The vehicle also reportedly contained additional makeshift mail keys.

Willis was arrested on suspicion of possession of burglary tools, burglary and  for an outstanding misdemeanor warrant out of Lake Havasu City for failure to pay fines.

All three were all taken to the Mohave County jail in Kingman.

The case remains under investigation.

Court records show Bartolini is facing 17 charges and is being held on a $28,500 bond as well as a no-bond for one of the narcotic charges.