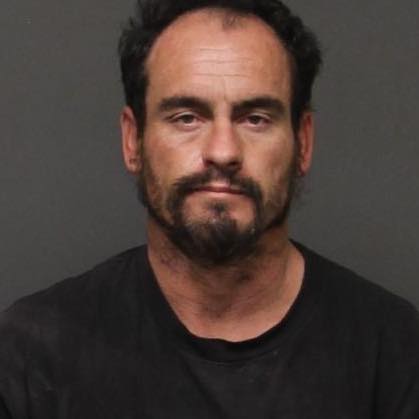 Mohave County Sheriff’s Office Detectives arrested Keith Allen Wilson, 37 of Yucca, for Arson of a Structure, 2nd Degree Burglary, and an active arrest warrant. On November 17th, deputies were called to a reported burglary on a home in the 19000 block of Gun Smoke Dr. in Yucca. The homeowner advised that he was currently out of state and the local neighborhood watch had alerted him of a break in at the residence. Deputies searched multiple structures on the property and no subjects were located, but obvious signs of a break in were observed.
The next day, Deputies were notified of a fire on the same property. Fire personnel reported that the house, garage, and an RV on the property were fully engulfed. Detectives responded to the residence to investigate and made contact with members of the neighborhood watch group who observed the initial signs of the burglary. A game camera had been placed on the property after the break in and were able to capture images of two vehicles entering the property after the burglary had been reported.
On Monday (11/28), Detectives responded to a residence in the area of Hollinger Dr. and Calva Rd. in Yucca and made contact with Wilson, who had been identified as a suspect in the burglary. During initial interviews, Wilson denied any involvement or knowledge of the burglary.
During a consented walk around the property, Detectives observed one of the vehicles seen on the game camera. During interviews with Wilson and his girlfriend, Detectives observed items on the property that had been reported as stolen from the burglarized property. Detectives also observed the second vehicle seen on the game camera on Wilson’s property.
During a secondary interview, Wilson admitted his involvement in the burglary, but denied any involvement in the arson of the property. Keith Allen Wilson was arrested and transported to the Mohave County Adult Detention Facility in Kingman without incident. This investigation is ongoing.