BHC Man Killed In I-40 Crash 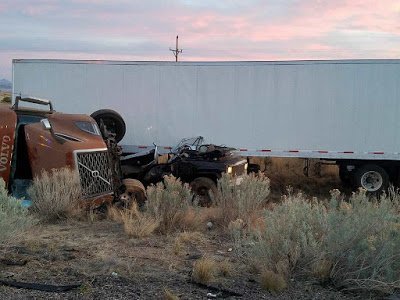 KINGMAN–A Bullhead City man was killed last week after his vehicle was struck from behind by a semi-truck just east of Kingman on Interstate 40.

Department of Public Safety spokesman Quentin Mehr said Glenn C. Scott, 73, was driving westbound on I-40 in the outside lane of traffic when it was struck from behind by a commercial vehicle just shortly after 4 a.m. on Sunday. Both vehicles came to rest in the median of the interstate. The driver of the semi, who was not injured, was only identified by DPS as being a 53-year-old man from Hilton, New York.

Fire and medical crews from Pinion Pine Fire Dstrict were dispatched for man power and use of extrication/lighting equipment. Mehr said the impact caused heavy entanglement between both vehicles, with Scott’s pickup coming to rest underneath the trailer of the semi truck.

Scott, who had to be extracted from his vehicle, died at the scene from his injuries, said Mehr.

The cause of the accident remains under investigation with DPS.