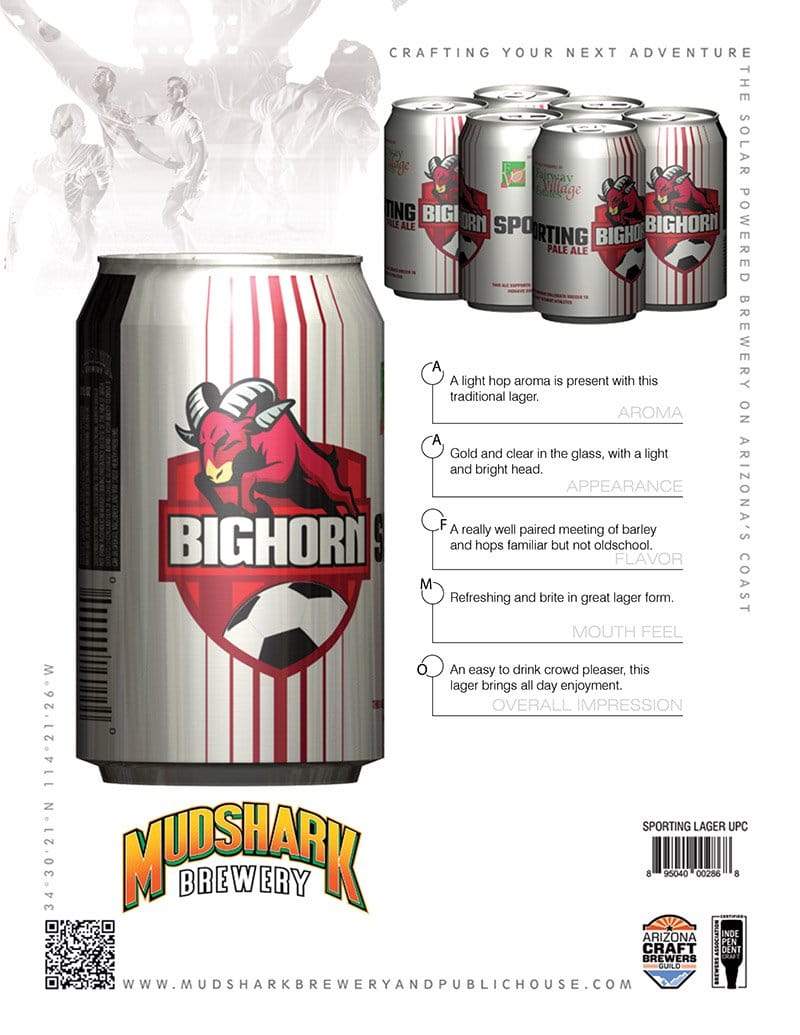 Lake Havasu City, AZ | Mudshark Brewery has partnered with Fairway Village Estates to bring Bighorn Sporting Lager to life. This custom labeled can is available starting Friday June 3rd at the Public House located at 1095 Aviation Drive in Lake Havasu City.  The lager was specially canned in collaboration with Mohave Community College to raise funds to bring collegiate soccer to the student athletes of Mohave County. 100% of all proceeds will go to MCC sporting programs thanks to not only the brewery but an additional sponsor Fairway Village Estates.

Learn more about this great local brewery at https://mudsharkbrewery.com/

Welcome to Mudshark Brewing Company, Brewery, & Public House in Lake Havasu CIty, AZ. Mudshark Brewing Company, which opened in September of 1998.  The brew pub is named after a popular locals’ beach of the same name. The beach got its unofficial name in the ’70s from the locals who hung out there and dubbed it Mudshark after a Frank Zappa tune that was hitting the airwaves at the time.

Like most brew masters, Mudshark Brewing Company’s previous brew master Ron Chieffo started out as a home brewer. Chieffo, a resident of Lake Havasu City for over 20 years, has a degree in forestry but was working as an information systems manager (managing computers) for the city of Needles when Scott Stocking, his mountain biking and homebrewing buddy, lured him away to work as an apprentice brewer at his new brew pub. Chieffo received on-the-job training as he apprenticed for six months with Mudshark’s original brew master, Wayne Wannanan, before stepping into his brew master boots. The frosting on the cake of his training came from Roberto Santos from Brewski’s/Bohemian Breweries, who walked him through Brewing techniques on the 15-bbl. Bohemian Brewing system.

The Brewery names of the beers reflect aspects of life on the Colorado River, including landmarks on the river. Mudshark’s six standard beers are the Upriver Lager, Pilot Rock Pilsner, Dry Heat Hefe, Underground Pale Ale, Scorpion Red Ale and Full Moon Belgian Wit. Now adding to the vast selection you’ll find “Havablue” a blueberry brew, “Wild Watermelon” the name says it all, “Moon Light” Full Moons lighter softer take, and “M-Shake”- a Strawberry Milk Shake inspired IPA. But that’s not all, with over a dozen brews to choose from, Mudshark Brewery has something for everyone.

← Prev: Billions of Dollars in Revenue Gained in Arizona from those moving here Next: UPDATE 06/03/2022: IN-CUSTODY DEATH- KINGMAN →