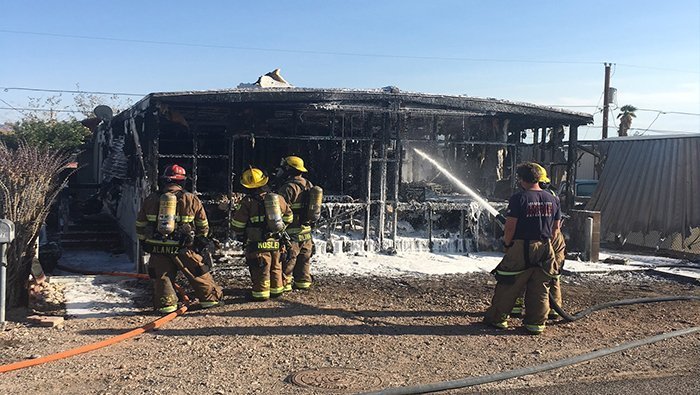 BULLHEAD CITY–No one was injured Sunday after a fire erupted inside a mobile home in the 1700 block of Sea Creek Drive.

The fire was reported to authorities a little before 2 p.m. on Sunday and fire crews arrived to the scene to find a double-wide mobile home structure fully engulfed. Firefighter’s quickly began attacking the fire and were able to knock down the bulk of the fire, protecting an adjacent home from sustaining any damage, said Bullhead City Fire spokeswoman Lori Viles.

All occupants safely evacuated the structure and no injuries were reported at the scene.

Viles said the fire was rapidly brought under control and confined to the building of origin. The cause, however, is still under investigation.

Mohave Electric Cooperative and Southwest Gas were dispatched to the scene and arrived to secure any utilities to the structure. A request was made to the American Red Cross to assist the home occupants.