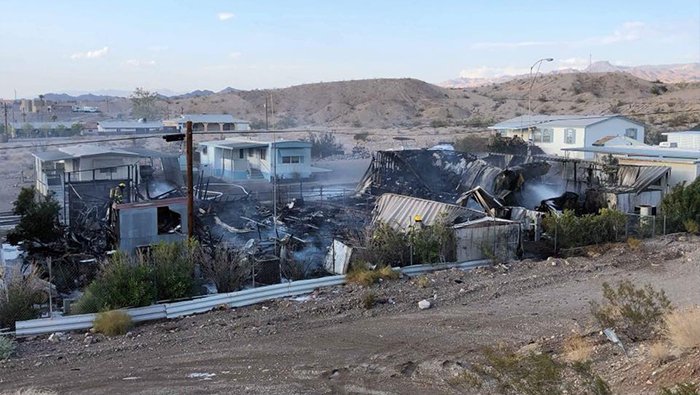 Neighboring homes and residents were immediately evacuated to a safer location away from the active fire, said Viles.

However, witnesses told firefighters one of the homes was still occupied, however it was not confirmed immediately until authorities reported two occupants were inside the mobile home where the fire reportedly started.

One of the residents were able to escape with the help of several bystanders. A second resident inside the structure was unable to escape and her body was found by firefighters after the blaze was extinguished.

Michael Attwell told The Bee on scene Tuesday, that he woke up to a humming noise like a propane tank and realized his neighbors house was on fire.

Atwell continued, “The fire started on the porch and it carried through the house too quick. Three other good samaritans helped get one of the ladies out and we had to rip apart the corner near the garage, got her out, but we couldn’t get the other lady out. It was way too hot and too much smoke.”

The homeowner who perished reportedly had several animals inside at the time of the fire. Viles confirmed that one cat died in the blaze.

Fort Mojave Mesa Fire Department, Clark County Fire and a unit from the Laughlin/Bullhead City airport assisted with the fire.

Initial reports on scene reported water issues and a delay for firefighters to attack the fire. However, Viles said that information is not correct.

“Apparently there is some confusion about that,” said Viles. “I am not sure where that information was initially reported. There was no issue with the water at the fire yesterday. Crews had to run an exceptional amount of fire hose from where the hydrant was located. In turn they had to pump the water through the engine and were able to adapt to the situation.”

Several crews rotated in and out of the fire scene as the CERT team set up a rehab location, Viles added.

A third mobile home, which was located across the street from where the initial fire started, sustained some damage. It is unknown how much damage was done and the estimated cost.

The American Red Cross was contacted to assist the people affected by the fire.

Check out The Bee’s Live video coverage of the fire below (JEFF ARGANDA/The Bee):

For more videos and photos of the fire scene, visit The Bee on Facebook @thebeeaz.