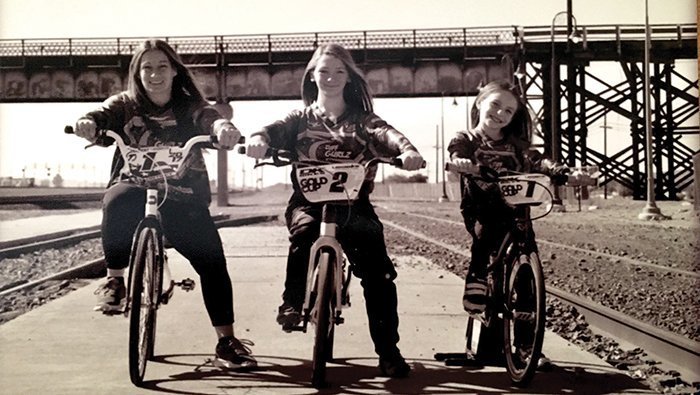 A sport that began from a bike enthusiast’s dream in the seventies, BMX has emerged as one of the most popular sports in the 21st century that has all genders and ages participating in the often grueling and thrilling off-road event that for many is often a family affair.

Rane Heffington, a long time resident of Mohave County, knows all about BMX. How the sport has evolved from the days of motorcross, into the high-flying bicycles of today that can be seen all over the country with all ages competing on the single-lap, dirt race tracks.

“The sport is very family-oriented.” said Heffington, a mother and grandmother of BMXers, who are serious contenders and have all competed in many races and have moved up in ranking to even win the number one spots in racing. Even Heffington’s two-year-old grandson, Noah, has gotten in on the family fun.

Kids his age, she said, use striders…bikes without pedals and also use a dirt track.

“There are also professional ranks that exist for both men and women where ages range from eighteen to forty.” Heffington said.

According to the BMX regulators, who oversees many of the rules and regulations of the sport, there are specific age groups and skill-level classifications among the racers.

The track usually consists of single-lap dirt race tracks. Usually eight tracks and a starting gate that is built for speed and is used for up to eight riders. The BMX races are sprint races that are derived from motocross racing or that is known as, “flying” on dirt tracks that are well maintained and are built for the purpose of off-road racing.

BMX racing is facilitated by a number of both regional and international sanctioning bodies that provide rules of conduct for the “flying”. There are specific age groups and skill-level classifications put into place among all of the racers competing for that season.

Heffington pointed out there are also professional ranks that exist for both men and women, who often have sponsors to support them in their quest to compete.

“The goal is to have fun while they are competing.” she said.

Heffington explained that kids wanting to get started in BMX, begin according to specific age groups as well as their skill levels. Heffington noted with many of the kids, their training helps to build their social skills and discipline, as well as endurance and bike handling that prepares them for racing.

While BMX racing is an individual sport, teams are often formed for different age classifications.

When asked about the pressure that is put on the riders who compete in such a fast-paced and grueling sport, especially among young children, Heffington said, “the only pressure is what you put into it.”

And she would know.

A FAMILY OF WINNERS

Heffington’s daughter, Tiffany, 36, who lives in Bullhead City, and her two granddaughters, Reagan Kelly, 14 and Payton Sarabia, 8, are BMX riders who are advancing quickly to the top of the ranks.

Tiffany reached top ranking in the sport this year in a racing event that was held in Texas and won the number one spot placing in the race. Heffington’s granddaughter’s have also claimed top ranking too in the Regional Championship earning a Gold Cup.

HAVING THE RIGHT GEAR TO COMPETE

There are specific BMX racing bike sizes. The 20-inch wheel bike for minors is the most

common class for racing, while “Cruiser” bikes have 24-inch wheels. According to BMX regulations, any bikes that have 24-inch wheels will still be considered “cruisers”, which are most common with older racers and is growing rapidly in popularity for the off-track sport.

Heffington admits that BMX isn’t for everyone, but sees the sport as a great opportunity for kids to bond, have fun and to forge friendships.

“We are all like a family.” she said. “We go to events together as a group and our families have barbecues together.”

Heffington indicated that the equipment and competing in BMX can be costly, but she pointed out that specific gear is required to ride and compete in the sport.

“Sponsors often help out with the costs.” she said.

While the list is long, most of the inventory is mandatory for safety measures and include: a helmet, knee and elbow pads, regulation pants and shirts, special shoes and optional “locking pedals”, which allow the riders shoes to lock in to keep them from slipping.

When asked about her safety concerns, Heffington says that the most danger is on the track itself.

“People can ride over you,” she said. “There is always the danger of another rider taking a spill into other riders on their bikes. Having the proper safety equipment usually prevents serious injuries to riders.”

Even as a big supporter of BMX, Heffington is quick to point out that “BMX is not for every child.”

Her daughter, Tiffany, is a fierce competitor and BMX champion herself, who often shares the spotlight with her own daughters, but as “a mother she is always concerned about their safety first whenever they take to the track.”

Heffington admits that BMX can be dangerous.

Payton did break two bones last year racing. Her granddaughter Payton, snapped her wrist and arm flipping the gate. “Payton was a little too quick and the gate landed on top of her crushing her bones.”

In preparation for their BMX racing, Heffington, says that her granddaughter’s have to train everyday. They workout regime includes kickboxing and endurance training and an hour of practice before every meet.

Proper diet and exercise are also encouraged by many coaches and trainers, as well as, parents who are their biggest supporters and just want to make sure that their BMX rider doesn’t overdo it or get hurt.

“There is no real ‘downside’ to BMX riding, it is all about fun and competition.” she said emphatically. “It’s a family affair.”

Heffington said a lot of practice and racing has been done over the years at the local Colorado River BMX track, off Highland Road in Bullhead City.

In August, the Colorado River BMX track reopened to local BMX enthusiasts under the direction of Turnell Henry after being closed for several years.

When you think of ‘Friday Night Lights’ it is football, but the lights that are flipped on at 7 p.m. at the BMX field are illuminating the dirt and jumps that riders will tackle for fun and experience. 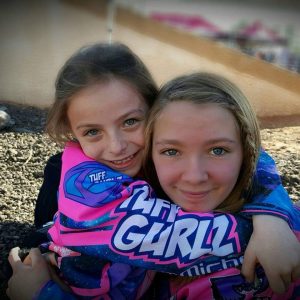 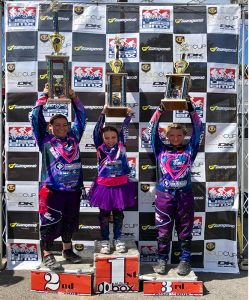 Note: Andrea Z. Smith has been a Journalist and a news reporter for fifty-years and has worked for over twenty years as a reporter in the tristate. area. She is now a documentary filmmaker and author of her book, “Women Who Kill The Men They Love.” She lives in California and loves ranching and cooking and spending time with her horses and other animals.