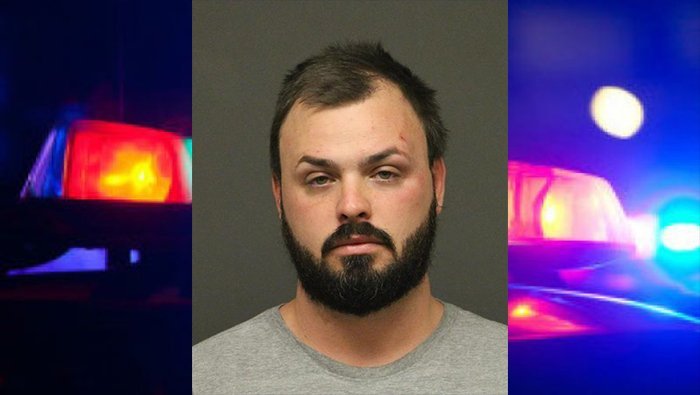 KINGMAN–An infant child escaped unscathed in an incident that left one person in the hospital and another behind bars late Thursday night in Kingman.

Kingman Police spokeswoman Jennifer Sochocki said officers were called to the 3000 block of North Evans Street around 9 p.m. Thursday for a 9-1-1 call regarding a physical domestic disturbance involving a male striking a female with a vehicle. Officers arrived on scene reportedly found Amaral sitting in his vehicle, which was inside the residence.

A female was trapped under the vehicle in the kitchen area.

Sochocki said Amaral reportedly ignored officers’ commands, but was taken into custody shortly after the crash.

The vehicle was removed by officers and the 24-year-old female victim was immediately treated by Kingman Fire Department and subsequently taken to Kingman Regional Medical Center with serious injuries to her leg and arm.

However, it wasn’t until Amaral was being taken into custody that officers learned about the six-month-old child was inside the home. The infant was found uninjured in a crib inside a bedroom that was about eight feet away from where the vehicle stopped in the kitchen, said Sochocki.

Further investigation reportedly showed Amaral was under the influence at the time a domestic dispute happened between the two. Amaral allegedly punched a television and damaged several items inside the home. At that time, Amaral left the home with his keys and drove the vehicle through the garage and into the kitchen of the home, where it struck his girlfriend.

Amaral was treated and cleared by Kingman Fire Department for minor injuries sustained to his hand during the arrest. He was taken to Mohave County jail. Additional DUI charges are pending following toxicology results.

The vehicle was towed from the scene and the home was determined to be structurally sound by Kingman Fire.