Pablo Jesus Solis Gonzales, 27, is facing a charge of unlawful flight from pursing law enforcement after he allegedly snatched a purse in Laughlin and fled when officers attempted to pull him over.

“Metro was following him in an unmarked vehicle and when Bullhead City Police officers got near Gonzales, he started to evade and ran from police,” said Fromelt.

Gonzales eventually stopped at the intersection of Ramar Road and Highway 95. He was taken into custody without further incident.

A female passenger was detained for questioning and later released.

The suspect’s mother, who was also a passenger in the vehicle, was given a ride home, said Fromelt.

Gonzales was taken to the Mohave County jail on the above charges and for a misdemeanor warrant for failure to pay fines. 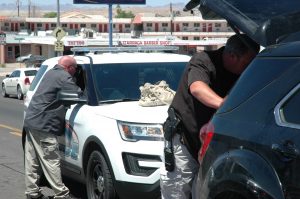 ← Prev: Time To Reel It Up In The "Best Of The West" Fishing Derby Next: Police Seeking Assault Suspect →

The Los Lagos Banquet an Events Center recently added the Drifting Bistro to its culinary offerings. Collectively, the...

Subjects Arrested for Domestic Violence, Fraud, and Methamphetamine On Tuesday, January 12, 2021 at approximately 9:05...