Tyler Michael Ziilch, 37, sustained stab wounds to the back torso area and taken to Western Arizona Regional Medical Center before being airlifted to a Las Vegas hospital for further treatment.

Bullhead City Police spokeswoman Emily Fromelt said her agency is investigating the case as an aggravated assault. Police were called to the Robson Circle area around 6 a.m. Thursday after Ziilch called emergency personnel to report he had been stabbed.

He was found in the street, said Fromelt.

During the investigation, police were informed by the homeowner that Ziilch had allegedly broken into his home and committed criminal damage, disorderly conduct and assault prior to being stabbed. Ziilch was reportedly contacted at this same home on May 26 by Bullhead City Police. The homeowner, who was not home at the time, informed officers that Ziilch did not have permission to be there.

However, the person who stabbed Ziilch has not been determined.

“There were other people at this residence and we are still investigating who stabbed him,” she said.

Police reportedly found several drugs and drug paraphernalia inside the home during the investigation. Possible charges involving the discovery will be forwarded to the Mohave County Attorney’s Office for review.

Ziilch was recently released from the Mohave County jail for the sixth time. He was previously arrested by Bullhead City Police on April 15, April 15, April 22, April 25, May 4, May 13 and May 16.

One arresting officer noted in his probable cause statement that Ziilch was a danger to the community and opposed any release from custody. 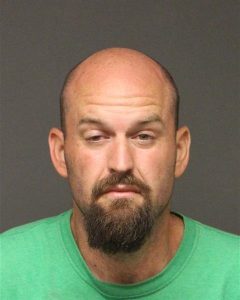 If You’re Behind the Wheel, It’s Against the Law

If You’re Behind the Wheel, It’s Against the Law Use of any Handheld Electronic Device While Driving is Illegal in...