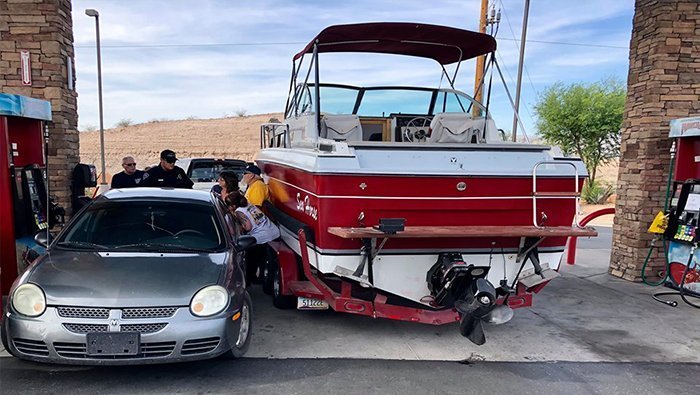 BULLHEAD CITY–A local woman sustained injuries to her legs after being wedged between a boat trailer and her vehicle Monday at Maverick gas station on the Bullhead Parkway near Desert Foothills Boulevard.

Bullhead City Police spokeswoman Emily Fromelt said emergency crews responded to an accident where a vehicle towing a boat had apparently collided with a pedestrian in the parking lot.

Fromelt said the driver of the boat trailer said he was getting gas and heard a female screaming. Passerby’s assisted in getting the victim out from between the vehicles as paramedics arrived on scene to assist.

“I was there when this happened. The driver smashed that poor lady into her car she was screaming so loud,” wrote Timothy Fitzgerrel on The Bee’s Facebook page. “About eight people had to life her car to the side to get her out. All she kept saying was she couldn’t feel her legs. My thought’s and prayers are with her.”

Sherri Short wrote, “This is just a freak accident. It does not happen all the time.”

The driver told officers he did not see the victim when he was driving and did not know he had hit her until she screamed, said Fromelt.

No citations were given at the scene and the incident remains under investigation.

Fromelt said officers are reviewing surveillance and if it does not show anything reckless or criminal intent, the driver will most likely not be cited.