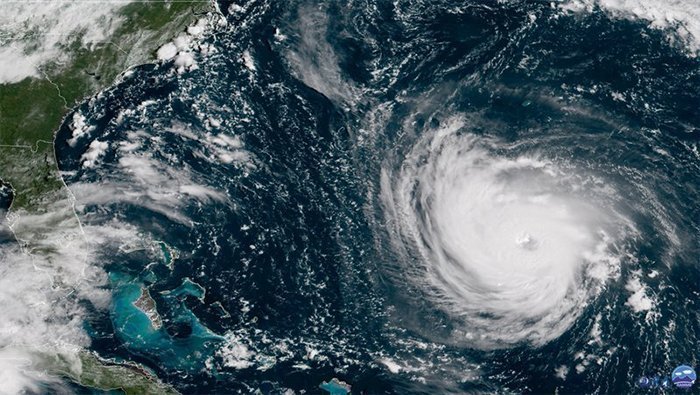 WILMINGTON, N.C. (AP) — Motorists streamed inland on highways converted to one-way evacuation routes Tuesday as about 1.7 million people in three states were warned to get out of the way of Hurricane Florence, a hair-raising storm taking dead aim at the Carolinas with 140 mph winds and potentially ruinous rains.

Florence was expected to blow ashore late Thursday or early Friday, then slow down and wring itself out for days, unloading 1 to 2½ feet of rain that could cause flooding well inland and wreak environmental havoc by washing over industrial waste sites and hog farms.

Forecasters and politicians pleaded with the public to take the warnings seriously and minced no words in describing the threat.

He added: “The waves and the wind this storm may bring is nothing like you’ve ever seen. Even if you’ve ridden out storms before, this one is different. Don’t bet your life on riding out a monster.”

President Donald Trump declared states of emergency for North and South Carolina and Virginia, opening the way for federal aid. He said the federal government is “absolutely, totally prepared” for Florence.

All three states ordered mass evacuations along the coast. But getting out of harm’s way could prove difficult.

Florence is so wide that a life-threatening storm surge was being pushed 300 miles ahead of its eye, and so wet that a swath from South Carolina to Ohio and Pennsylvania could get deluged.

People across the region rushed to buy bottled water and other supplies, board up their homes, pull their boats out of the water and get out of town.

A line of heavy traffic moved away from the coast on Interstate 40, the main route between the port city of Wilmington and inland Raleigh. Between the two cities, about two hours apart, the traffic flowed smoothly in places and became gridlocked in others because of fender-benders.

Only a trickle of vehicles was going in the opposite direction, including pickup trucks carrying plywood and other building materials.

Long lines formed at service stations, and some started running out of gas as far west as Raleigh, with bright yellow bags, signs or rags placed over the pumps to show they were out of order. Some store shelves were picked clean.

“There’s no water, there’s no juices, there’s no canned goods,” Kristin Harrington said as she shopped at a Walmart in Wilmington.

At 5 p.m., the storm was centered 785 miles southeast of Cape Fear, North Carolina, moving at 17 mph. It was a potentially catastrophic Category 4 storm but was expected to keep drawing energy from the warm water and intensify to near Category 5, which means winds of 157 mph or higher.

The storm’s coastal surge could leave the eastern tip of North Carolina under more than 9 feet of water in spots, projections showed.

Federal officials begged residents to put together emergency kits and have a plan on where to go. 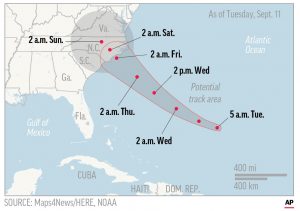 ← Prev: Elizabeth Smart Kidnapping Suspect To Be Released From Prison Next Week Next: Fraudulent Card Skimmers Found In Kingman →