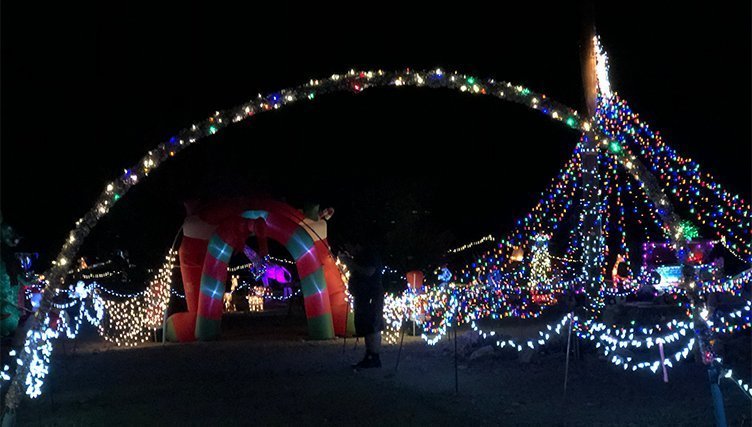 GOLDEN VALLEY–If you’re feeling a little out of touch with the holiday spirit this year, a trip to Golden Valley may just be what you need to restore that lost feeling thanks to the magical Christmas lights display created by Butch Meriwether and his wife, Chris.

Over 70,000 lights illuminate the dark as you enter the driveway of the sprawling property, which is filled with Christmas decorations and other holiday-themed items.

The display, which is open to the public for only a donation of pet food or an unwrapped toy, has been a yearly tradition for many families in the Tri-state, while for others it was the first time taking in the majestic holiday lights.

“This is so amazing,” said Kathy McKinney. “We were wanting to go to a light display show and we thought we’d have to go to Las Vegas until one of our rock family member told us about this one.”

McKinney, who is co-creator of the Bullhead City Rocks group, brought a caravan of family and friends with her Sunday night.

“It will definitely become a tradition for our family group,” she said. “The kids are loving it and the hospitality we received here tonight was amazing. He (Meriwether) does an outstanding job and to have this right here in our backyard makes it convenient for us to attend versus driving four hours roundtrip to Las Vegas, or even farther, like Phoenix.

McKinney said the smiles of the kids who joined them is what made the trip well worth it. The group sipped on hot chocolate and indulged in homemade cookies and brownies that are available to all who attend the light display.

But, it just isn’t about putting smiles on the faces of those who come out, it is also about putting food in the bellies of the animals who call For The Luv Of Paws home and presents under the tree for Christmas morning.

“We  have already surpassed 1,700 pounds of dog and cat food donations.”

The light display began in 2011 and continues to grow strong each year. In addition to donating to For The Luv Of Paws, the Meriwether’s also accept donations for the Marine Corps Toys for Tots program.

Over the last three years, Meriwether has collected $4,159 dollars and 6,430 pounds of pet for for the Golden Valley non-profit animal organization, as well as $1,110 dollars and 374 toys for the Toys for Tots program.

“Donations aren’t mandatory to come out, they are just much appreciated,” said Meriwether. “What we do is all worth it when people come up.”

The Christmas light display continues from now until January 2. Times are from sunset until around 11 p.m. nightly.

The display is located at 2225 S. Dome Road in Golden Valley. You can reach the location by turning south on Egar Road, near mile marker 17 on Highway 68. Proceed down Egar about four-and-a-half miles. Turn right on Tappets Drive. Travel west for about one-half mile until you see the lights display.