Could County, State Benefit From Immigrants Being Placed In Local Prison? 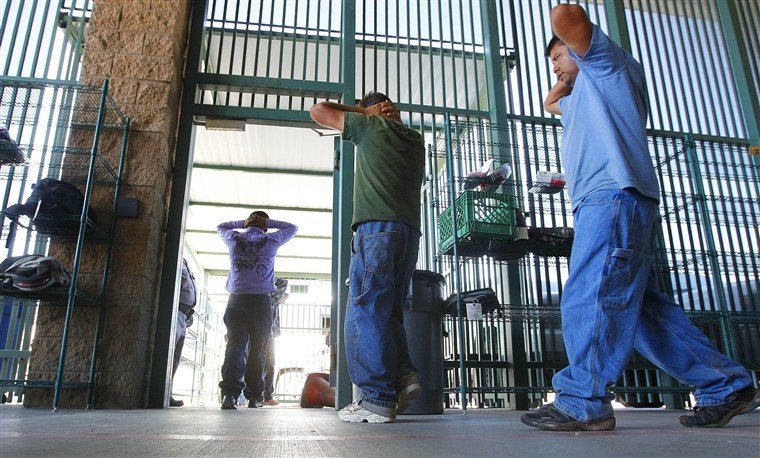 GOLDEN VALLEY—Will the next stop for immigrants, who have illegally crossed the border into the United States, be our local prison?

If the current administration continues on the path it is on, this latest idea of “Prison-for-Profit” could take the next step into detaining illegal immigrants—and possibly their children—and place them into prisons while they await their fate.

However, private prisons are nothing new to Arizona.

GEO Group, Inc., which is considered one of the “Big Three” of private for-profit prisons—is contracted with the Arizona State Prison Complex just outside of Kingman. The prison is a minimum to medium-security facility.

The contract was awarded to the Geo Group in December 2015 following a four-day riot inside the Hualapai Unit in July 2015. Close to 1,000 inmates were transferred to various prisons around Arizona due to the extensive damage caused by the rioting. The Arizona Department of Corrections nixed Management and Training Corporation’s contract in August 2015, citing that they failed to control the riots, among other issues. The riots reportedly caused nearly $2 million dollars in damages.

This new executive order recently signed by President Trump would be a great way of recouping some of its losses, if, they were to jump aboard this latest business enterprise for detaining illegal immigrants.

Reports by advocates against this idea say that it costs an average of $750 a day, per child, to detain.

CEO George Zoley told the Sun-Sentinel last May that the prison group is the largest contractor for Immigration and Customs Enforcement (ICE) and the company expected a 27 percent gain from the $1 billion for illegal immigrant detention in the federal budget resolution passed for the fiscal year ending last September.

“We have 25 percent of all the detention bed capacity across the country and would expect to achieve at least that percentage of future opportunities,” Zoley told the Sun-Sentinel.

Geo Group, Inc. is the largest provider of detention services for Immigration and Customs Enforcement, the Federal Bureau of Prisons and the U.S. Marshals Service.

Overnight, Geo Group’s stock skyrocketed by nearly two percent. A sign that may indicate private prison contractor’s are hoping to bank on the investment of illegal immigrants being detained in their prisons.

The executive order now requires immigrant families to be detained together when they are caught entering the United States from Mexico illegally, for as long as their criminal proceedings take.

A civil rights attorney in Phoenix, who wished to remain anonymous because of their attempts to get into some of the areas that have been sequestered from the public and media, told the Associated Press, “This is nothing new to the prison system. It happened in 2007, but it was not transparent enough for us or the public to know about or get involved with.”

The attorney fears that the already over-crowded detention centers could exacerbate the already cramped and squalor conditions, especially for children. Proponents say that using the private prison system would provide more humane measures of detention for the illegal immigrants.

One favorable factor for states to consider in utilizing the private prison system, is that housing illegal immigrants would be far cheaper than the current system by US Customs and Border Protection.

It would also eliminate the tents and cages currently used now, that opponents and child rights advocates say are nothing more than jails and internment camps. Many have compared these facilities to the internment camps used during World War II while housing Japanese/American citizens and that of the concentration camps of Nazi Germany.

It is not known yet whether Mohave County will play host to GEO in this plan to detain illegal immigrants. A call has been made to the Mohave County Board of Supervisors and the GEO Group regarding this issue.

The Bee has contacted the administration of the Kingman prison to ask if there are any plans to utilize the Arizona location to house any of the illegal immigrants. No call was returned by press time.