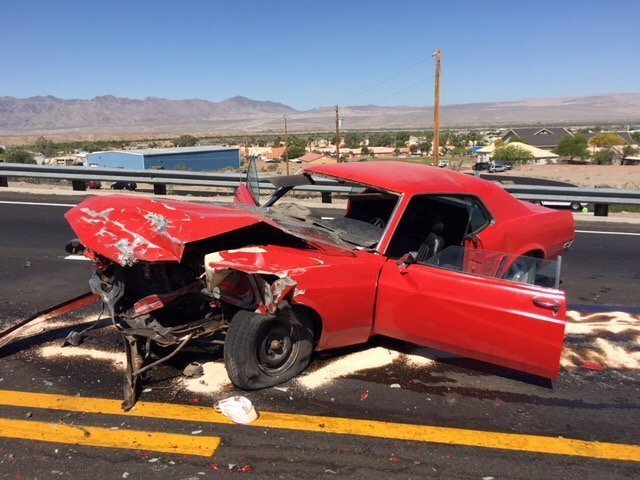 Viles said the female driver of one of the vehicles had been ejected from the driver’s side window on impact.

She was taken to Western Arizona Medical Center with a suspected head injury, Viles said.

It’s alleged the victim was not wearing her seatbelt at the time of impact. The identity or current condition of the victim is not known. A second driver at the scene refused treatment.

“To ensure the safety of all motorists, the Bullhead City Fire Department would like to remind you to always buckle up,” said Viles. “Seat belts save lives, prevent injuries and are the best defense against impaired, aggressive and distracted drivers.”

The second crash happened shortly before 10 a.m. at the intersection of Highway 95 and Corwin Road.

Investigations reportedly show the Mustang had crossed over the center median and struck the delivery truck head on.

Two passengers from the Mustang were taken to Valley View Medical Center with unknown injuries. The driver of the delivery truck reportedly did not suffer any injuries, reported Viles.

← Prev: UPDATE: Two Killed In Boat Crash At Desert Storm Shootout Next: Educator of the Week-4/23/18 →