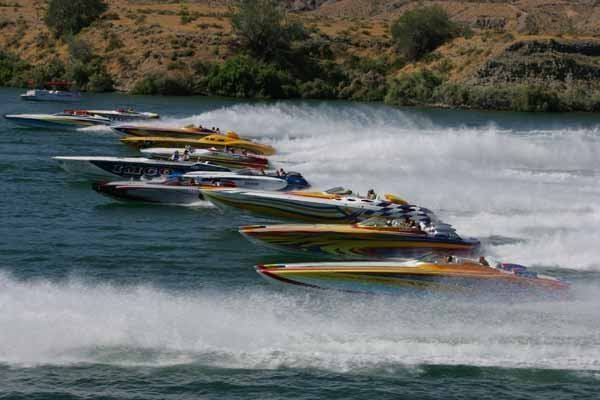 LAKE HAVASU CITY–The annual Desert Storm Poker Run gets underway today in Lake Havasu City and law enforcement is urging spectators to use caution during the event, which has been dubbed on of the Top Five Poker Runs in the nation by Performance Boats Magazine.

The event runs from today until Saturday, April 21 with events scheduled throughout the city and on the water.

The Mohave County Sheriff’s Office Division of Boating Safety will be one of several local law enforcement agencies out patrolling the event that draws crowds by the thousands each year.

A parade will be held today at 11 a.m. in Thompson Bay and will continue into the Bridgewater Channel, said MCSO spokeswoman Anita Mortensen. The poker run will commence shortly after the completion of the parade.

Mortensen said attendees and those on personal watercraft need to be aware the boats participating in the event are capable of traveling up to 150 miles per hour.

“If you are planning on enjoying our beautiful waterways this weekend, please be vigilant and constantly aware of your surroundings. Most importantly, boat safe, boat smart, boat sober and wear a life jacket,” she said.

The Desert Storm Shootout, which is where drivers run a course starting near the Site Six Launch Ramp, will begin at 10 a.m. Saturday, April 21. Organizers for the event state the best viewing of the shootout is on the surrounding bluffs on the Island near Site Six to Spectator Point. The Nautical Beachfront Resort is also a fan favorite spot to take in the races. For more information, visit www.stormpokerruns.com.