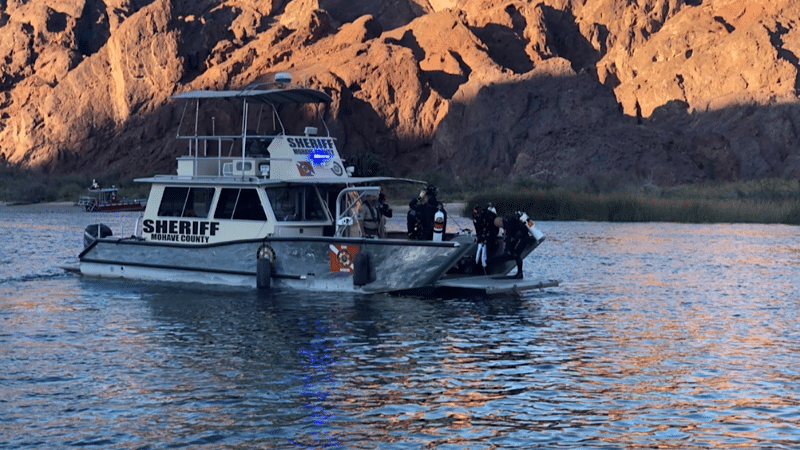 The Mohave County Sheriff’s Office Division of Boating Safety and Dive Rescue and Recovery Team are continuing their investigation into a double drowning that occurred on the Colorado River near the Topock Gorge on Thursday (10/14). Two subjects, a male and female, both entered the water after a personal item fell from the boat. The male subject was pulled from the water by passing boaters and CPR was performed, however the male subject was later declared deceased at a local hospital.

The male subject was positively identified as James Weaver, 75 of Valley Center, CA. Search efforts continued this morning for the missing female and will continue until sundown utilizing divers and side scan sonar technology. Please avoid the area of the Topock Gorge and allow search teams room to work.

On Thursday (10/14), The Mohave County Sheriff’s Office Communication Center took several emergency calls of a male subject who had been pulled from the water, and was unresponsive in The Colorado River, near the Topock Gorge (15 miles North of Lake Havasu). Units from the Mohave County Sheriff’s Office Division of Boating Safety responded to the scene. Upon arrival, several subjects were observed performing CPR on the male subject on a beach near the location. Deputies immediately took over life saving measures.

A Fire Boat from the San Bernardino County Fire Department arrived on scene, and transported the male victim to a local hospital, where he was pronounced deceased. It was also learned that a female victim was still missing in the water. Through investigations, it was determined that both victims were on board their boat and were traveling
North on the Colorado River. During their travels, a personal item fell from the boat. While attempting to retrieve the item, the female victim fell into the water.

The Mohave County Sheriff’s Office Division of Boating Safety and the Dive Rescue and Recovery Team conducted a search until night fall, but were unable to locate the missing female. The search will continue on Friday (10/15) utilizing divers and side scan sonar technology. Please avoid the area of the Topock Gorge and be aware of search teams in the area. This incident is still under investigation and identification of the victims is pending next of kin notification.