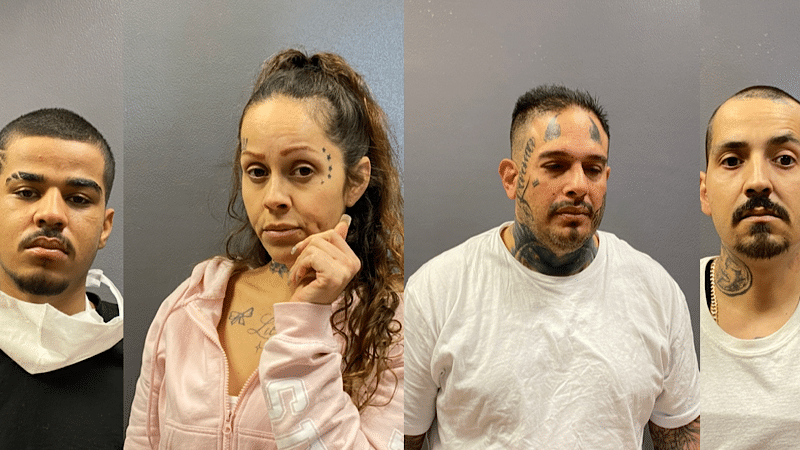 BULLHEAD CITY, Ariz. – February 7, 2022 – Bullhead City Detectives, assigned to the Gang & Immigration Intelligence Team Enforcement Mission (GIITEM), arrested four people while executing two local search warrants as part of a drive-by shooting investigation. On January 29th, Bullhead City Police responded to a drive-by shooting where there was a confrontation between two parties in the Bullhead City Wal-Mart parking lot. The two parties knew each other due to ongoing conflict. Both parties reportedly decided to go their separate ways; however, when they later crossed paths again near the Wal-Mart parking lot, one shot was fired into a vehicle shattering the front windshield. The victim’s vehicle was occupied by two men and five children. No one was injured.

The investigation was turned over to GIITEM after detectives learned that two documented gang members had fired a handgun at close range into the vehicle. On Friday, February 4th at 8:40 a.m., GIITEM and AZDPS SWAT made entry into a residence in the 7700 block of Valley Parkway Court in Mohave Valley. Raymond Oscar Rodriguez, 38, and his nephew, Davonta Daniel Rodriguez, 19, were both arrested for seven counts of aggravated assault and drive-by shooting of an occupied structure.

A second search warrant was executed at an apartment in the 400 block of River Glen Drive in Bullhead City. Weapons were seized, including the handgun believed to be used in the drive-by shooting. Veronica Rodriguez, 42, (Davonta’s mother/ Raymond’s sister) was arrested for hindering prosecution for lying to police during the course of the investigation, and child abuse. The weapons were located in the living room, all within reach of her children.

Her boyfriend, Gabriel Robert Macias, 45, was also arrested at the second search warrant location. He was arrested for possession of dangerous drugs and paraphernalia. Methamphetamine was located in their apartment. All four subjects were booked into the Mohave County Jail in Kingman. The Department of Child Safety was contacted regarding the children at both locations.