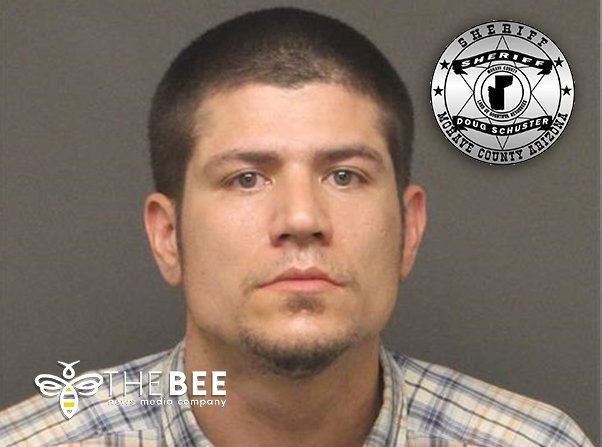 DRUG/ WEAPON POSSESSION- KINGMAN
Mohave County Sheriff’s Office Deputies arrested Steven Allan Davis, 34 of Kingman, for Narcotic Drug
Possession, Narcotic Drug Possession for Sale, Possession of a Weapon in Use of a Drug Offense, and
Possession of a Weapon by Prohibited Person, all felonies. On Monday (1/14) at approximately 2 PM,
deputies observed a black SUV travelling north on Van Nuys Rd. and a records check revealed the vehicle
to have a mandatory insurance suspension. Deputies attempted to conduct a traffic stop, but the vehicle
made an abrupt turn into a parking lot. A nearby deputy was able to position his vehicle at the exit of the
parking lot, cutting off the vehicle and forcing it to stop. As deputies approached the vehicle, they observed a
female driver and male passenger. The male passenger began reaching under the seat and deputies drew
their weapons and gave verbal commands for the passenger to show his hands, to which he complied. As
deputies opened the vehicle’s doors, they could see drug paraphernalia items on the passenger floor board.
The male subject was detained and a search of the passenger seat revealed a 9mm handgun with a round
loaded in the chamber under the seat. A further search revealed a black duffel bag in the back seat which
contained 3 grams of heroin, six syringes loaded with heroin, a scale, baggies, and men’s items, which led
deputies to believe the bag belonged to Davis. A records check revealed Davis to have prior felony
convictions, making him a prohibited possessor. The female driver denied knowing that the drugs, gun, or
paraphernalia items were inside the vehicle. Steven Allan Davis was arrested and booked into Mohave
County Jail without incident.