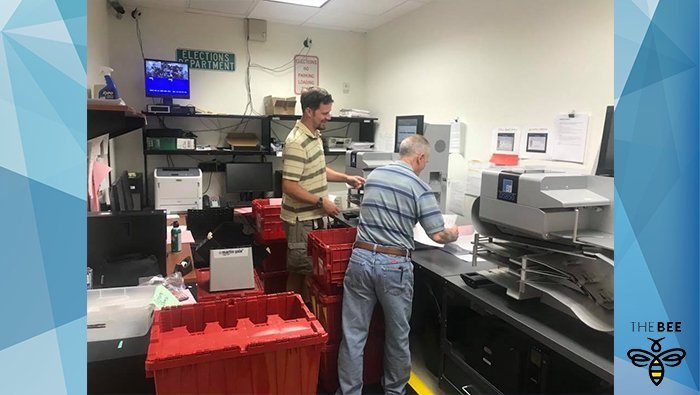 KINGMAN – Thousands of ballots full of penciled in circles nominating state, county and city government officials were being rapidly sorted through electronic voting machines at the Mohave County Elections Department at the county administration building in Kingman late Tuesday night.

In a county administration building board room opened for media observation nearly ten hung out to see election results.
They kept asking about when Mohave County Elections Director Allen Tempert would show up with more numbers.

It was like being at a concert and anytime someone wondered on stage to check the sound, the crowd thought it was the band.

Tempert is the lead in a band that has played every song on the playlist but has to find another song to hold the audience over long enough to let the drugs wear off to the point where the fans cant drive, but they can “totally drive man.”

Numbers and results flashed before the eyes of media.

Jen Miles, Stuart Yocum, last-minute Kingman City Council candidate Tim Griepp showed up and were all sitting and staring at a constant flash of elections results.

Miles herself was exhausted and made a bee-line towards her car.

“I’m full of appreciation,” she said. “I’ll work hard to be objective as a mayor,” said Miles, who was joined by Yocum, Griepp and other supporters of local, county and state candidates while the results rolled in.

The ballot counting continued until around 5 a.m. when all precincts were accounted for and the website was updated.

As of Wednesday morning, and with a 100 percent reporting, Jen Miles was declared the new mayor of Kingman, while Ron Gould confirmed his seat with the Mohave County Board of Supervisors for District 5.

McSally will now head to the General Elections on November 6 and face off against Krysten Sinema. The winner will fill the vacancy left by the late Sen. John McCain.

For complete results to the Arizona Primary, visit www.mohavecounty.us.