BULLHEAD CITY, AZ — August 14, 2019 — EPCOR has donated 191 cases of water (6,585 bottles) to benefit
River Cities Resource Center as part of Lerner and Rowe’s Code Red Heat Relief campaign to help prevent
dehydration among members of the community’s most vulnerable populations during the hottest part of the
summer.

EPCOR’s Bullhead City team – 27 locally based employees led by James Lands, operations supervisor for
EPCOR’s Bullhead City office – funded 121 cases with EPCOR adding another 71 cases. Lerner and Rowe’s goal
for this fourth annual campaign is 500 cases of water (approximately 12,000 bottles).
“Arizona’s summer heat can be hard on everyone in Bullhead City, but vulnerable populations, including
homeless individuals, have a particularly tough time staying healthy during the hottest part of the year,” said
Lands. “We’re pleased to support Lerner and Rowe’s water bottle drive and we hope everyone in the
community will join in this effort.”

More About Lerner & Rowe Gives Back
Inspired by the film, Pay it Forward (2000), Lerner and Rowe’s managing partner, Kevin Rowe, founded Lerner &
Rowe Gives Back, a non-profit organization dedicated to changing the world for the better by harnessing an
ever-widening network of people to help improve communities through direct, collective action. Lerner & Rowe
Gives Back Foundation’s efforts support children, families, homeless individuals, and military veterans, among
others. 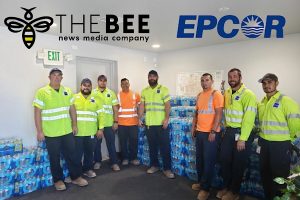 ← Prev: The Gift that will keep Giving Next: UPDATE - Arrest made in Lowe’s Shooting →

During times of crisis, scammers look for opportunities to gain personal information from unsuspecting people. It has...

According to data released by the Southern Nevada Health District, deaths involving fentanyl or fentanyl analogs...