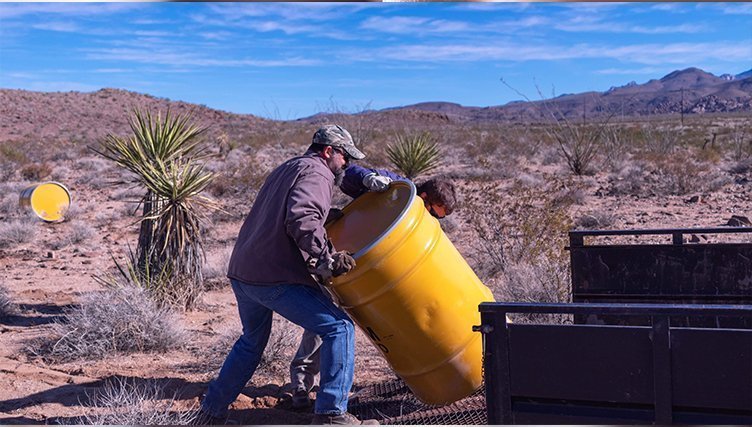 BLM personnel load a sealed barrel of used motor oil onto a trailer at the illegal dump site. The investigation into who dumped the items is in the hands of the federal government. CONTRIBUTED/Charles Black

KINGMAN – An illegal dump site discovered in November got an early Christmas cleanup.

Discarded tires and oil are mostly gone, but no suspects have been found in a desert littering case now being handled by the Bureau of Land Management.

Kingman videographer and photographer, Charles Black, discovered an illegal dump site on Nov. 10 in the desert just south of Kingman on BLM Road 7142, about a quarter-mile from Frontage Road adjacent to Interstate 40.

The site was littered with more than 100 tires from cars, trucks and race cars as well as four 55-gallon drums of used motor oil and other chemicals. Many of the tires looked like they were recently changed from their host vehicles and disposed of and oil from the barrels had soaked into the soil.

“I was livid,” Black said in November. He regularly uses parts of the area for movie and photo shoots. “This will ruin in for the majority of people who take care of the place.”

He promptly contacted the Bureau of Land Management and Mohave County Environmental Rural Clean-up Enforcement (ERASE). On Dec. 13, those crews along with volunteers from the Walapai 4 Wheelers off-road vehicle club hauled away a total of 112 tires and four 55-gallon drums of used motor oil.

According to BLM Spokeswoman Valerie Gohlke, the financial price tag of the operation (personnel, disposal drums and fees included in disposing the tires and oil) is still being tallied.

“We have no idea what the cost will be until it’s all done and even then it’s hard to know for sure because we were so fortunate to have wonderful volunteers help us,” she said via email. “Illegal dumping does cost the taxpayer through disposal fees, staff time, etc.”

Environmental impacts won’t be known until the leaked oil is cleaned up.

“We have no way to know how much or how deeply it saturated the ground,” Gohlke said. “The BLM Colorado River District will continue to oversee disposal of the drums through a federal contractor followed by an assessment of the soil impacted from the draining of the oil.”

The investigation is now in federal hands.

ERASE Program Coordinator, Detective Todd Davison, said his detectives determined the site to be on BLM land with no obvious suspect leads and turned the investigation over to BLM.

“I responded to the clean-up and provided a tire manifest to cover the cost of the tires at the landfill,” Davison said. He didn’t have an official cost of the disposal since the Mohave County Landfill still has the invoice.

“We’ve had 40 combined felony and misdemeanor cases submitted for prosecution so far this year,” Davison said and added over the last two years judges have sentenced defendants to penalties including one or a combination of probation, jail, restitution and work service and fines ranging from $25 to $1,971.40.

The fines for this incident can vary according to Gohlke.

“It depends on the investigation and how much (courts) can prove/convict,” she said.

Davison said ERACE has strongly focused on prosecution of cases this year and that help from volunteers has helped with clean-up efforts.

“We’re definitely watching out for litterers,” he said. “We take this seriously and appreciate the help of the public.”