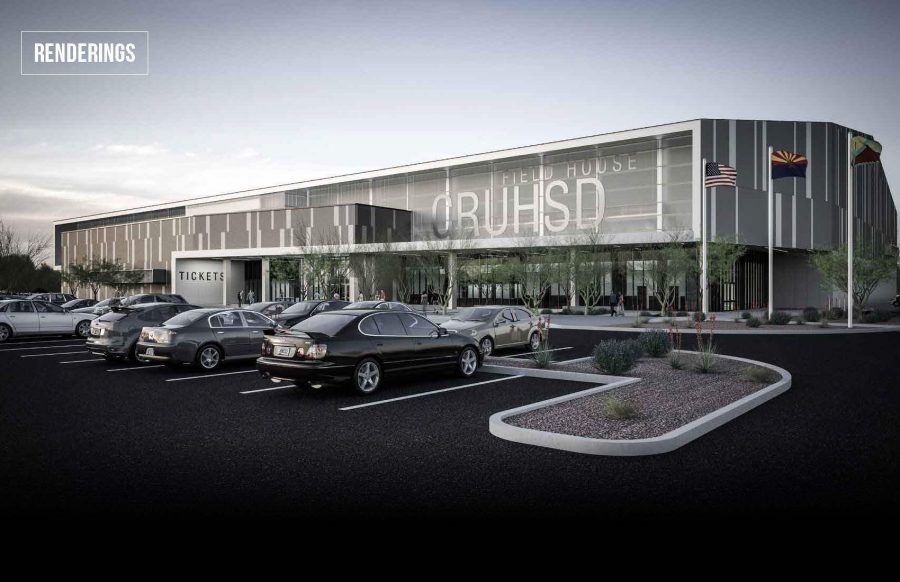 The open house will be tied to a ceremony naming the indoor arena the “Anderson Auto Group Fieldhouse.”

A free continental breakfast will be available on a first-come, first-served basis beginning at 8:00 a.m., followed by the naming rights ceremony at 8:30 a.m.

Virtual reality tours will also be available after the ceremony, showing what the building will look like from the vantage point of standing on the site.

Construction will soon be visible from Arizona Highway 95.  Work on the voter-approved project has so far included site preparation, trenching for utility conduits and piping, pouring of the concrete foundation, installation of bases for pillars, and placement of the elevator shaft base.  Steel for the building’s frame has been delivered to the site, and the fieldhouse skeleton will soon begin taking shape.

The Anderson Auto Group of Bullhead City, Kingman and Lake Havasu City was awarded naming rights for the 125,000 square foot indoor arena, located at the southwest end of the Bullhead Parkway, northwest of the Mohave Crossroads Shopping Center.  The $625,000 sponsorship is for $125,000 annually for five years, and is renewable after that. School district Superintendent Riley Frei made the announcement during a meeting earlier this month with the Bullhead City Council.  The CRUHSD school board will be presented the formal naming rights contract at its meeting on Monday, June 25.

The Anderson Auto Group Fieldhouse will be west of Highway 95, adjacent to the site of the new bridge connecting Bullhead City and Needles Highway south of Laughlin. Visitors to Saturday’s event will be allowed to park along the Bullhead Parkway east of the construction site.

Due to forecast high temperatures, those attending should dress accordingly and remain hydrated.

← Prev: Mosquito Fogging Begins Tonight In Mohave Valley Next: GV Man Arrested After Allegedly Crawling Through Window With A Weapon →