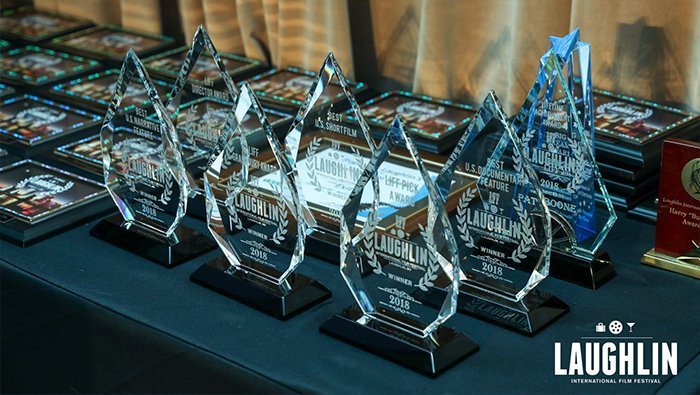 LAUGHLIN–Its a wrap! The Laughlin International Film Festival wrapped up its seventh year of independent films with a grand awards ceremony at the Tropicana Laughlin on Oct. 6.

“This is one of the best film festival I have attended,” said Albert Fry, Jr. “I’m speechless about winning this award. It was not suspected. There are so many great films that have been shown.”

Fry took home the Best Lead Actor in a Short Film for A Bitter Reckoning during the awards ceremony.

LIFF co-creator Mara Karsen told the attendees Saturday that without all the great filmmakers and submissions “we wouldn’t have a film festival.”

The “theme” of this year’s Laughlin International Film Festival circulated around family, friendly films and atmosphere.

“There have been years when our film content was crime and drama, but this year we have had a great selection of films that were in the category of PG,” said Karsen. “Our inspiration is to see more young filmmakers submit their films in the coming years.”

Mohave High School seniors Canyon DiMare and Quincy Barham won Best Youth Feature Film for MURRDER: Locke and Loaded; Brian Brown was awarded with not only the Harry “Bud” Holland award for his film Seasons, as well as, Best Local Film for his mind-twisting thriller Strawberry Fields; and Judy Belshe-Toernblom for Booneville Redemption.

LIFF’s 2018 Lifetime Achievement Award was presented to Pat Boone, who portrayed a pivotal character in the western-themed film, Booneville Redemption. However, due to a family illness, Boone was unable to attend the awards ceremony. A filmed acceptance speech was played to the crowd as Boone thanked the film festival for the award.

A second special message from Diane Ladd was played. Ladd, who was also in the film Booneville Redemption, congratulated her co-star for his achievement award.

“This is much deserving for a great man who has been in the film and music industry all his life,” she said.

Karsen said Booneville Redemption was one of nearly 100 films that were screened over the four-day weekend event. The film festival included social networking, workshops, Oktoberfest, directors panel and a youth passport event.

Awards were presented to the following:

Check out all the photos from the event HERE.

CAPTION: Awards are displayed on a table awaiting to be handed out during the 7th annual Laughlin Film Festival awards ceremony on Oct. 6 inside the Pavillon at Tropicana Casino. CONTRIBUTED/The Bee