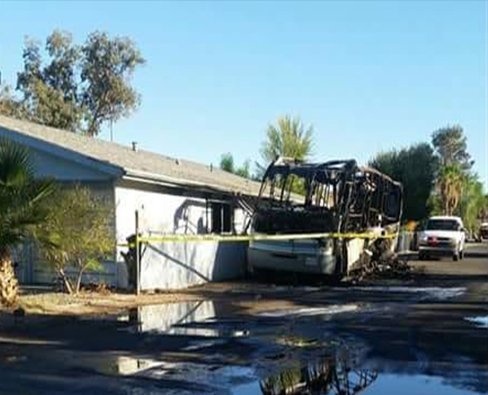 BULLHEAD CITY–A motorhome was deemed a total loss by fire officials after it went up in flames late Thursday afternoon in the 1300 block of Lincoln Lane in Bullhead City.

Bullhead City Fire spokeswoman Lori Viles said the call came in around 3:50 p.m. and crews immediately noticed a large amount of smoke as they were en route to the scene. Additional engines and support were subsequently requested to assist.

Firefighters quickly worked to control the fire and stop it from speaking to the adjacent home.

An unidentified man told The Bee he noticed the motorhome on fire and rushed into the nearby home to rescue the two dogs inside.

LeeAnna Taylor said she witnessed the man run into the home, thinking it was his house he was saving the dogs from.

“When I talked to him he told me he was a neighbor and saw the motorhome on fire. He knew the homeowners had left so he knew he had to rescue the dogs,” she said.

He was able to find one dog, but reportedly due to the smoke had to leave without the second one.

Taylor said she witnessed a firefighter exit the home with a small dog in his care. The dog was taken to a waiting animal control officer for further care.

Firefighters were able to save the residence by extinguishing part of the fire that had extended into the home and garage, said Viles.

No additional injuries were reported and the cause of the fire remains under investigation at this time.

Check out our on scene video below: