Firebirds’ Plane Returned To Airport Due To “Engine Concerns” 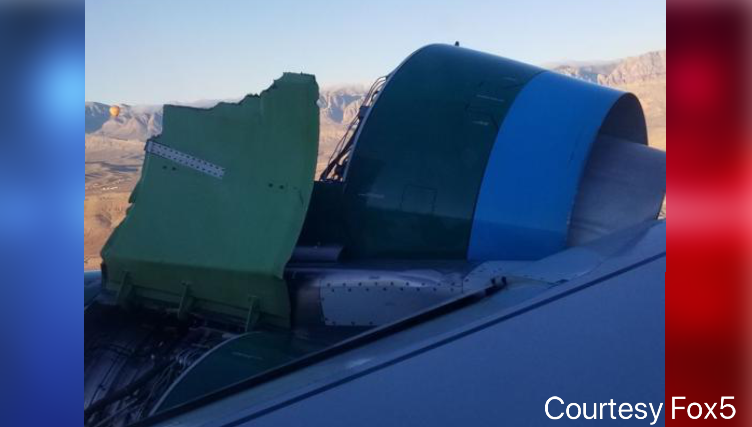 An engine cover was ripped off during take off Friday morning on Frontier Airlines flight 260 that was bound for Tampa, Florida. Courtesy of Fox5 Las Vegas.

LAS VEGAS–The Bullhead City Firebirds youth football team journey to the national championships in Florida got off to a rocky start after their plane experiences engine issues shortly after take off Friday morning.

According to Fox 5, the Airbus A320 with 166 passengers on board en route to Tampa, Florida had to make an emergency return to Las Vegas McCarren International Airport shortly before 7:30 a.m. Friday after a section of an engine cover came loose and separated from the aircraft. The plane had departed from the airport at 7:13 a.m.

A statement from Frontier said that safety was a top priority of the airlines and they worked diligently with making sure the passengers arrived at their destination safely and quickly.

One special group of passengers on board the plane were the Bullhead City Firebirds Youth Football team who were heading to Orlando to play in this weekends American Youth Football National Championships.

The Bee has learned the team had to be separated into three groups.

“They put us in a few different flights, late flights where some are still on the plane and a few are still waiting at McCarran airport,” said Lili Alvarado.

In the photo below (Fox5), the team is seen waiting near the Frontier gates following the emergency landing.

The team had a mandatory 9 a.m. check in Friday in Tampa for the championships game, reported the Tampa Bay Times.

Frontier Airlines is said to have refunded the passengers and given them a $500 voucher for travel at a later date.

The is a developing story. Check back for updates.

← Prev: Road Work For Week Of Dec. 3 Next: Christmas Festivities Kick Off In Kingman With Parade Of Lights →