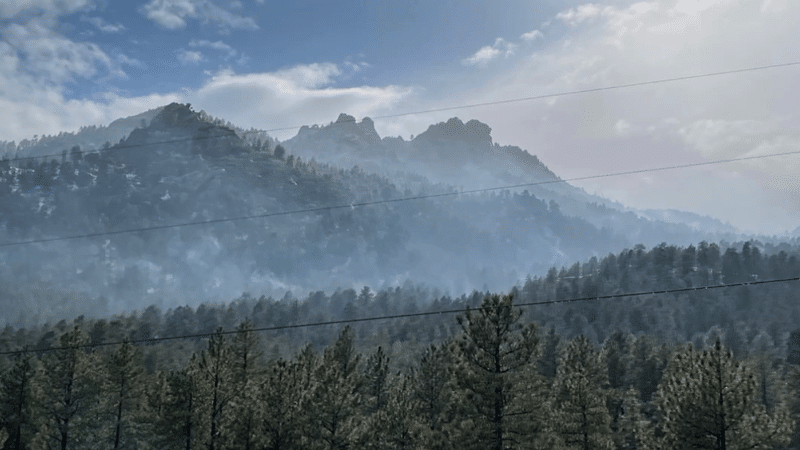 MOHAVE COUNTY, AZ (April 28, 2021) The Flag Fire in the Kingman area’s nearby Hualapai Mountains was remapped by Incident Management Team (IMT) and the fire burn area has been reduced with the total acreage a total of 1,279 acres. Limited visibility had prohibited an air assessment of the blaze. The fire is burning, but, there was no significant growth reported.

The fire has consumed Ponderosa Pine at higher elevations, brush and grass.  There are 327 personnel currently assigned to the blaze.  At this time, 13% containment is reported.  Total cost so far is estimated at $1.4 million. There is no perimeter growth. Firefighters on the Flag Fire have been utilizing recent moisture to their advantage with the cooler weather conditions, light rain, and snow at higher elevations from Tuesday night in the fire area.

Ground crews worked the fire perimeter putting out hot spots and clearing and reinforcing the containment lines. The 13% containment sector extended from the northeast corner of the fire southward along the eastern side of the Park to the northern edge of Pine Lake. The sector southwards from there to the southern end of the community received significant work and is well on the way to being considered contained.

The south side of the fire was not manned, but received a good test from the north wind and exhibited no growth. Significant progress was made on the western perimeter. Air assets also assisted with retardant drops. A contingency team scouted the area between the fire and Lazy YU, Atherton Acres, and Pinion Pines and developed plans and potential stop lines should the fire progress in that direction. It should be noted that there is still considerable smoke from the interior of the blaze from smoldering vegetation and ignition of some unburnt areas.

It is expected that the moderate north winds (10 mph) will continue tomorrow with a change to SW winds on Friday. Saturday and Sunday will feature 15-20 mph SW winds with low humidity and high temps so the fire threat will be high. However, it is expected that the progress tomorrow and Friday will contribute substantially to containment of the perimeter prior to those days of increased risk.

Mohave County Supervisor Buster Johnson declared a County Emergency Monday morning (April 26) as a result of the Flag Fire. He also signed the Joint Delegation of Authority Flag Incident document, which was also signed by leaders of BLM, the AZ Dept of Forestry and Fire Management, and by the Incident Commander, Central West Zone Incident Management Team. This Joint Declaration basically delineates the authority and responsibility of the financial costs regarding the Flag Fire. Authority and responsibility primarily weighs on the BLM.

The reopening of Hualapai Mountain Park is undetermined due to the Flag Fire emergency. The priority is, of course, the safety of everyone involved. Once a reopening date is available, it will be announced to the media and public through a county press release. Fire managers and the Mohave County Sheriff’s Office are continuing to assess when it will be safe for evacuated residents to return to their homes.

The area is a No Drone Zone:  A temporary flight restriction is in place over the Flag Fire. Flying a hobbyist drone over a fire puts everyone at risk and hinders firefighting suppression efforts. If you fly, we must ground all aircraft, including the large air tankers due to the dangerous conditions drones pose in unauthorized airspace. Always follow FAA rules when flying your aircraft. If caught, your drone could be confiscated by law enforcement and you could face hefty fines.

There have been numerous offers of donations of food, bottled water, cookies, and other items from the Kingman community. Despite the good intentions, authorities are unable to accept donations. This is partially due to our COVID-19 protocols and our firefighters have everything needed to support operations. Please donate to the Cornerstone Mission in Kingman, the local food bank, or make cash donations to the Wildland Firefighter Foundation.
Fire Danger is high. Use caution when recreating or working outdoors. Check for fire restrictions or information on fire activity around Arizona at: https://wildlandfire.az.gov/

Mohave County residents are encouraged to learn more about Arizona’s Ready-Set-Go program and sign up for Mohave County Emergency Notifications by visiting: https://ein.az.gov/ready-set-go