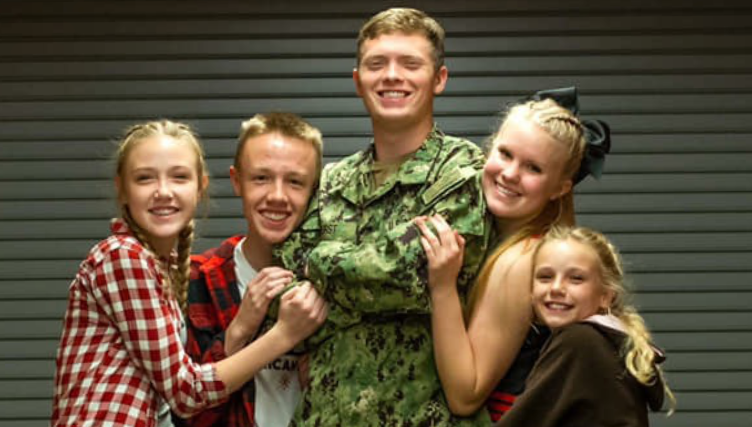 KINGMAN–It was a Christmas surprise that drew lots of happy tears for one Kingman family this week.

Navy Third Class Petty Officer Tyler Hurst-Nelson surprised his siblings this past week after his ship arrived back to port in Japan a few days early. He took a 30 hour plane ride to get back stateside

Hurst’s mother, Jenny Nelson, said her son had already been stationed in Japan for two years after graduating from Kingman Academy of Learning in 2014.

“He’s been on deployment since May and his ship the U.S.S Ashland came home a little early so he was granted leave,” said Nelson.

First stop of surprise appearance was at his sister Becca’s cheer during a basketball game at Lee Williams High.

A video posted on Nelson’s Facebook page depicts the emotional reunion between brother and sister. Hurst made additional surprise visits to his other three siblings at their schools, as well as, family members in Bullhead City and Fort Mohave.

Hurst is an electrician in the Navy and is stationed in Japan for three years. He returns to Japan next Saturday.

Merry Christmas Hurst–Nelson family and thank you for your service to our country Tyler!!