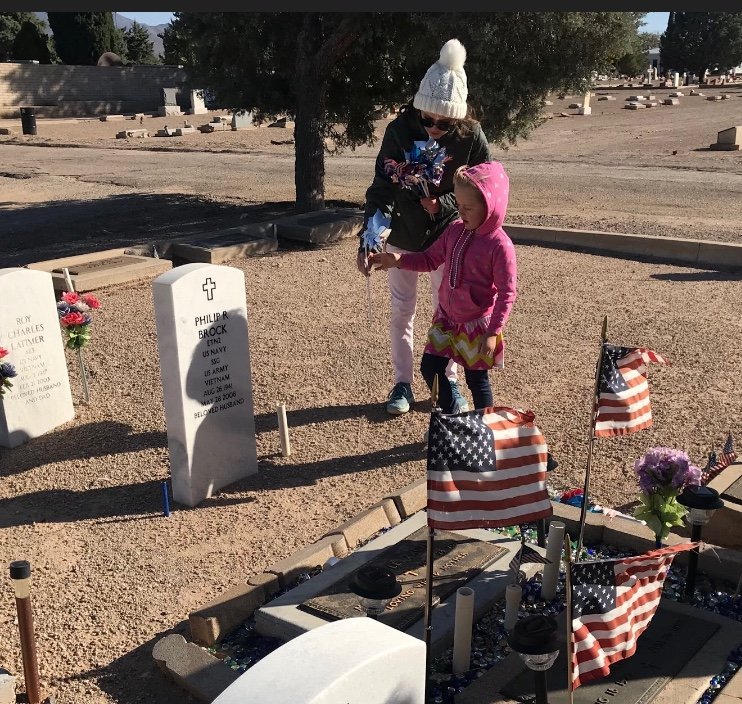 While many Veterans Day parades and festivities were held on a calm, warm Saturday, Girl Scout Troop 1090 layered up for a trip to Mountain View Cemetery to make a mark in what almost seemed more like a Memorial Day gesture.

Plenty of flags had already been placed near headstones earlier this week, but a party of ten girls and troop leaders had a unique assortment of memorials.

The plan was to plant the articles near veteran’s headstones that didn’t already have flags or other signs of recognition.

For about an hour, the girls and leaders zig-zagged through the rows of grave markers looking for signs of service and noticing a few other oddities along the way.

They recognized names they’d seen on street signs or heard their parents talk about. Two girls were shocked to find the unmarked grave of a one-year-old baby.

The cemetery experience was new, exciting and macabre to most of them and Ricca, who has a few relatives (including great grandparents) buried at Mountain View, tries to make the experience educational.

“I try to take the newer girls here at least once a year,” she said. “I think cemeteries are an important part of culture.”

During the short trip, two girls discovered brother/father veteran headstones next to each other and another group found the headstone of a soldier who fought in both World War I and II – conflicts fought nearly a quarter-century apart.

Some of the girls were in Saturday’s Veterans Day parade in downtown Kingman, but Sunday they all learned something – and showed something – more about sacrifice.

Five of the scouts (and the leader) have veterans in the family, including Sarah Fiddler, whose grandfather, Ron, once served. She appreciates his effort and was happy to be a part in showing support.

“I think doing something like this is important,” she said. “Veterans gave their time for us, in now we’re giving back to them.”