Girl’s Loss Of Horse Kicks Off “Rally Around Aly” Fundraiser 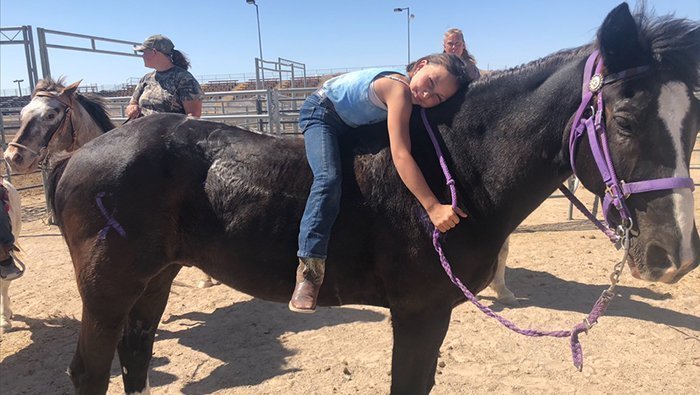 BULLHEAD CITY–A Facebook post earlier this week prompted one local business owner to rally around one little girl after the death of her favorite horse.

“I was heartbroken when I saw this picture in Facebook of Aly and knew I had to do something for this amazing child,” said Patty Dion, owner/partner of Jester’s Sports Lounge in Bullhead City.  “So I’m determined to get her a new best friend..horseback riding is her therapy.”

Alyssa “Aly” Tudor, 13, always has had a love and passion for horses since she was young. Her dream was to own a pony and ride. But, life threw a curveball to the Tudor family and at the age of three, Aly was diagnosed with High Risk Stage 4 Neuroblastoma.

“It was sudden. We learned of her cancer when she just quit walking,” said Aly’s mom, RoJeana Wymbs. “Doctor’s found a tumor sitting on her back and it had severed her spinal cord, paralyzing her.”

But even cancer couldn’t stop Aly from pushing forward with her passion for horses and riding.

“We created a special seatbelt and stirrups on a kids saddle so Aly could ride,” said Wymbs. “My sister lives in Kingman so we went there a lot for her to ride. We’d walk her around and as she got the hang of it she’d start doing it herself.”

Aly blossomed and her horse riding continued as she got older. Now, she tackles Gymkhana with one of her best friends, Cami Hood.

“They are riding partners. When Alyssa met Cami they became instant friends over their love of horses and riding.” said Wymbs. “It was their friendship that led to the finding of Alyssa’s horse, Dodge.”

Wymbs said a tire blow out on a side road in Mohave Valley led to Cami’s dad, Denny, to Dodge.

“Dodge was being boarded at Julie Wakimoto’s home and she had come out to help Denny that night he blew the tire,” she said. “They got to talking and he mentioned how he had a friend’s daughter looking for that “one” horse. She told him that she had an older, gentler horse that was perfect for Aly.”

After that, the rest was history, said Wymbs. Aly met Dodge, who was once a wild Mustang, and the two became insperable over the years. But, sadly this past Monday, Dodge passed away at the age of 23.

“He was up at the Mohave County fair over the weekend because Aly competed in the Gymkhana portion,” explained Wymbs. “He got sick and just went down hill from there. Aly never left his side or his stall the whole weekend we were there observing him. It broke our hearts when we had to make the decision to put him down because of his health.”

However, it was Dodge’s death announcement on Facebook that jump started the “Rally Around Aly” fundraiser by Dion.

“This month is Childhood Cancer Awareness Month and as the 2017 (Community Achievement Award) Humanitarian I’ve always helped with our community with homelessness, meals, trunk or treat, supporting other businesses, Guardian Foundation and water drives,” said Dion. “But, this little girl stole my heart and needs the communities help. My staff and customer’s at Jester’s always helps with whichever fundraiser we decide for the month. We started this one very late in the month so we really need everyone to pitch in and help with this.”

Wymbs said Aly has undergone 12 rounds of chemotherapy, two stem cell transplants, 30 rounds of radiation, six antibody therapies and multiple surgeries over the past ten years. As of now, Aly is considered cancer-free for eight years.

“Words can not express how I feel about the community coming together for my daughter,” said Wymbs, who has been a lifelong resident of the Tri-state. “My daughter is such an inspiration to me and the joy I have knowing my daughters dream with not end is..like I said words can’t express my gratitude. If you could see her on her horse it is amazing. She is normal, there is no difference, she is equal.”

Wymbs said even though Aly is cancer free, her daughter still battles side effects.

“She is in a wheelchair for the rest of her life and is dealing with bone damage issues,” Wymbs said. “But, she is a fighter and will continue with her dreams.

The fundraiser will be held Sept. 30 from 2 p.m. to 5 p.m. at Jester’s Sports Lounge, 877 Hancock Road. Hot dogs and hamburgers are being provided by CoVeu/Java Jitters owners David Rubio and Paul Perkins.

Dion said they are still looking for donation raffles and someone to donate their time to provide music entertainment during the fundraiser. For more information, call Jester’s Sports Lounge at 928-763-0850. 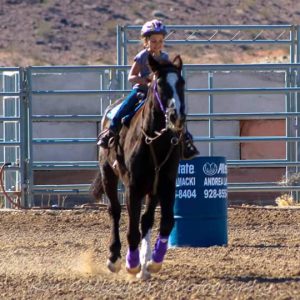 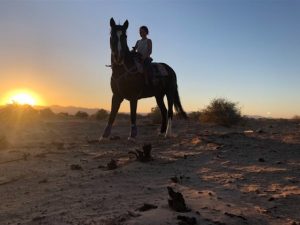 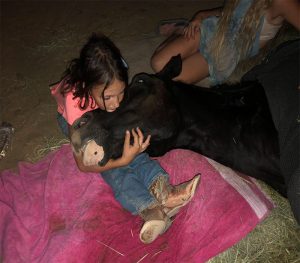