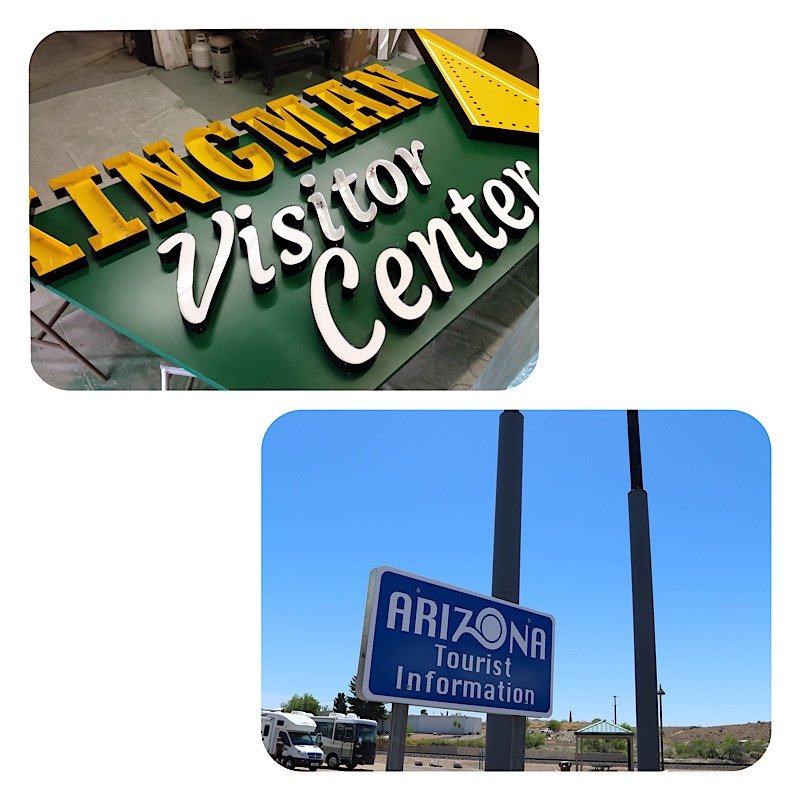 Kingman, AZ – The Kingman Visitor Centerhas a new monument sign, like a pin in the ground letting visitors know they’ve arrivedin Kingman, the Heart of Historic Route 66.An inaugural lighting will be held virtually on May 20 from 7:00pm to 7:30pm and everyone can join by visiting the Facebook page @GoKingman.

The project came with challenges, but many great projects were completed in spite of difficult circumstances. The Transcontinental Railroad was delayed by the Civil War. The Golden Gate Bridge and Hoover Dam were both built during the depression. New York’s funding for the Statue of Liberty during the Long Depression was sodismal that cities in other states offered to cover the cost of erecting it in their harbors. Even the Eiffel Tower was initially built to be scraped in two decades, though it still stands today.

Historic notations like these put Kingman’s newest landmark in good company. A neon with flashing lights, mid-century modern masterpiece rising 30 foot from the ground with an iconic Route 66 shield and topped by yellow spheres like a martini held by ol’ Blue Eyes himself. Yes, even Sinatra would agree it’simpressive like that.

How did it come to this in the first place, what was the back story? In 2015, the City replaced the Powerhouse’s original tired wooden entry sign with a new structure of similar design but more sturdy engineering, including 10 inch pipe supports and all metal framework. Then in May 2017, a driver in a pickup truckrammed into the sign at high speed, tearing through the supports, retiring the 25 foot giant a mere 20 months after completion.

It was as if the universe had suggested, given us a sign so to speak, that it was time for a new look, a divergence from the old era. In that line of thinking, the Kingman Office of Tourism paused and sought inspiration.  They looked at other iconic landmarks such as the Welcome to Fabulous Las Vegas sign, the Hollywood sign, and monumental specimens along Route 66 like Twin Arrows or Roy’s Cafe. Staff downloaded images, sketched prototypes, parting together bits of neon, art deco and retro like pieces from mismatched Legos legacy sets. Eventuallythe office reached out to local sign producers for help.

Matt Phillips of Legacy Signs, a sign company located in downtown Kingman, was one of the first to respond. Matt presented a few conceptual renderings and it wasn’t long before they landed on a winning design.

“I thought of the Jetsons, of the 1950s and how neon was a major part of signs at the time” said Matt. “That inspired me in this design and I’ve always wanted to make a sign this cool.”

Work began in late 2019, before economies slowed in the midst of a pandemic. Legacy Signs continued work in spite of setbacks and kept crafting through uncertainties and disruptions of supplies. Now, just after the three year anniversary of Kingman Visitor Center’s mangled welcoming pylon, a new marker is rising from the ruins.

The masterpiece was conceptualized and constructed by Legacy Signs, electrified by Walker Electric, and funded through the City of Kingman’s Tourism budget with a major contribution from the Historic Route 66 Association of Arizona. A Live Facebook stream of the first lighting will be held at sunset on Wednesday, May 20, and will be preceded by a live compositionby singer/song writer Chris Commisso, incorporating tunes from every era of the Mother Road, from the 1920s to today. The public is invited to join and watch the virtual event on the Kingman Tourism Facebook page, @GoKingman, it will begin at 7:00pm with the lighting taking place just around sunset at 7:30pm.

Born from destruction and in a time of social distancing, the Kingman Visitor Center monument sign is a beacon of what’s to come when travelers once again get their kicks on Route 66. But for now, pace yourself, join the live stream and check it out from a distance.