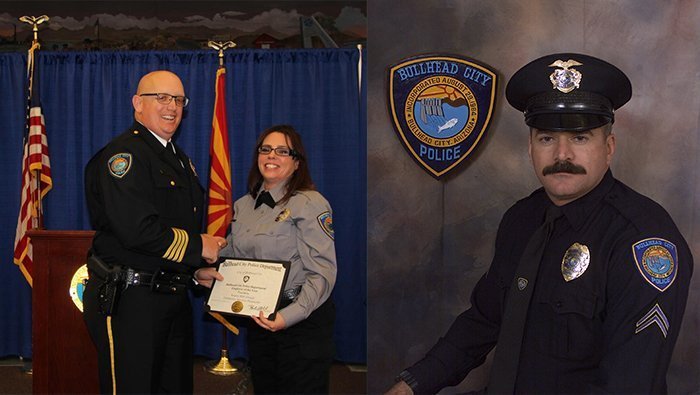 BULLHEAD CITY-–The Bullhead City Police Department recognized police officers and civilian employees at an annual awards ceremony that honors those who have contributed in a special way to help others and improve public safety.

Corporal Bruce Greisen was named Police Officer of the Year and Emergency Services Dispatcher Angie McCullough was named Civilian Employee of the Year during the 2018 Annual Awards Program.

Corporal Greisen began his career with the Bullhead City Police Department in 1990. He was promoted to the rank of Corporal in 1998. He served in the United States Marine Corps as a military police officer from 1986 to 1989.

“Corporal Greisen is a valued member of the team with a wealth of knowledge and experience,” said Police Chief Brian Williamson. “He is a well-respected member of the Department for his professionalism, wisdom and willingness to help. He treats his peers and the citizens he encounters with respect and commands the same respect in return.”

Corporal Greisen is also a Range Master and a sniper on the SWAT Team.

Angie McCullough has been an Emergency Services Dispatcher since 1994.  She began her career with the Bullhead City Police Department as a dispatcher in 2004 and served for four years. She returned again in 2016.

“Angie is dependable, reliable and can always be counted on to cover shifts, come in early or stay late; whatever is needed to keep dispatch running smoothly,” said Chief Williamson. “She is a team player with a positive attitude, and a role model for her fellow employees due to her exceptional job performance, attention to detail and work ethic.”