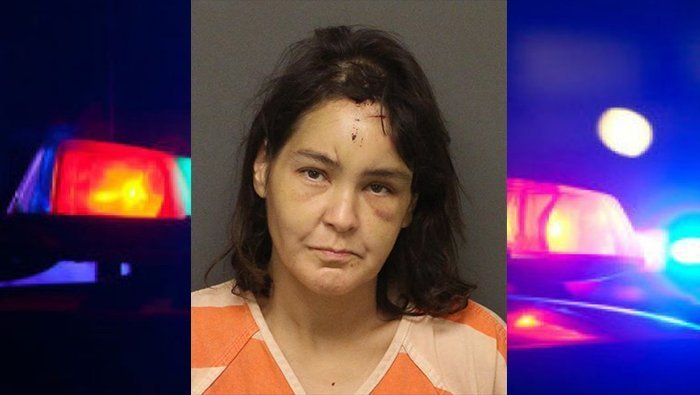 GOLDEN VALLEY–A local woman is facing multiple felony charges in connection to an arson that happened Tuesday night in the 6000 block of Vaquero Drive in Golden Valley.

Heather Marie Amundson, 38, is charged with aggravated assault with a deadly weapon, arson of a structure, resisting arrest, all felonies; and criminal damage and disorderly conduct, both misdemeanors.

Sheriff’s Office spokeswoman Anita Mortensen said deputies were called to the Vaquero Drive residence in reference to an arson that had occurred. Once on the scene, deputies contacted the victim who reported he and Amundson had been fighting and the victim left to “cool off”.

When he returned, the victim told deputies he noticed large flames coming from the RV that he and Amundson lived in. The victim yelled for a neighbor to help him.

Amundson was reportedly seen fleeing the property as the victim was running toward his engulfed RV.

Mortensen said the victim reportedly found Amundson at a truck stop off Interstate 40 and called the sheriff’s office. When deputies arrived however, Amundson was gone. The victim informed the deputies he attempted to speak with her, but she reportedly began yelling at him to move his vehicle. The victim stated when he was walking to his truck, Amundson allegedly put her vehicle into reverse and attempted to strike the victim with her vehicle. No injuries were reported.

Amundson was later found at the Golden Valley residence after the victim contacted MCSO again, informing them she had returned to the area.

Mortensen said deputies entered the home and gave commands for Amundson to show her hands. Amundson was reportedly hiding under a bed and when deputies attempted to pull her out, she allegedly resisted and began kicking deputies. She was tased removed from under the bed. However, she had to be tased a second time after she continued to resist arrest and reportedly reached for her waistband.

She was subsequently placed into custody and taken to the Mohave County jail in Kingman.