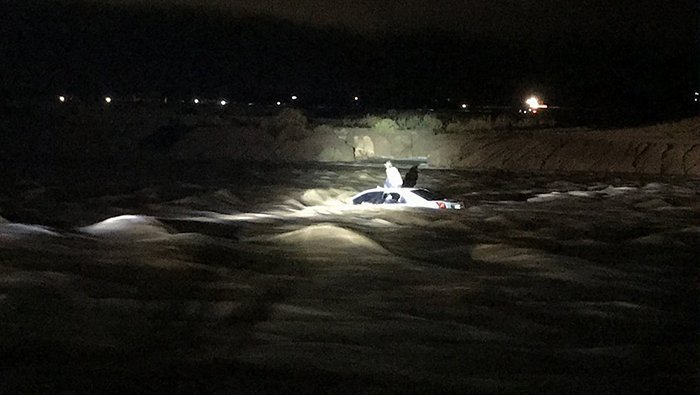 MOHAVE COUNTY–It was a busy night Wednesday for search and rescue teams as a torrential thunderstorm dumped heavy rains in the Tri-state causing flash flooding in roadways and washes.

The Mohave County Sheriff’s Office said their agency received multiple calls regarding numerous vehicles being swept away into running washes in Golden Valley and Kingman. One man escaped rushing waters and waited on the roof of his white Cadillac vehicle as rescue teams began their swift water rescues.

Authorities would like to remind everyone to use extreme caution around running washes and to turn around, don’t drown.

As of Thursday, the Sacramento Wash in Topock has been closed from milepost zero to milepost four due to heavy flooding run off, mud and debris. Motorists can use Mohave County Route 1 to Courtwright and Highway 95 as an alternate route.

The storm that hit the Colorado River area Wednesday night was part of a storm cell from southern California. Heavy rain and, yes, even hail fell from the skies in parts of Needles, Mohave Valley and Fort Mohave.

Mohave Electric Cooperative customers experienced sporadic outages throughout the night with some last no more than an two hours. Crews worked diligently through the storm to restore lines and power poles. The number of customers affected were not immediately available.

The National Weather Service reported the heaviest rainfall in the Stockton Hill Road area of Kingman with over two-and-a-half inches of rain over a three hour period.

“The storm was movie southwest to the northwest with a bulk of the rain hitting Kingman,” said NWS Meteorologist Chelsea Kryston. “Residents in Mohave Valley saw quarter-sized hail, which is about an inch in diameter. Hail is a pretty important issue for us and anything over an inch we classify as severe hail. For those in Fort Mohave, it was dime-sized and those are about a half-inch in size.”

Kryston said other rainfall totals for Bullhead City were .35 to .59 inches; Fort Mohave was .59 inches; Golden Valley saw between .57 to 1.18 inches; South Kingman received 1.61 inches of rain and gauges on the US 93 and Interstate 40 interchange were 2.24 inches.

Winds were in the norm, said Kryston, adding that the highest wind speeds were around 45 miles per hour in Needles.

In Kingman, City of Kingman Public Works crews were working Thursday morning to clean up from last night’s storm in the area of Lead Street. A large portion of the road washed out during the heavy rainfall and left broken asphalt, rocks, mud and debris strewed across the roadway.

However, Cooper said no injuries were reported. 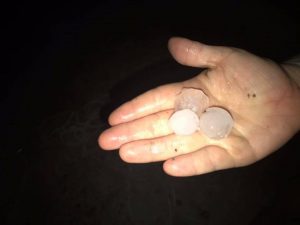 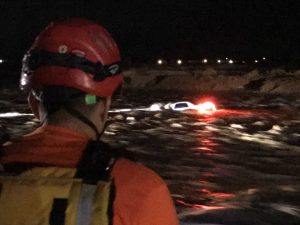 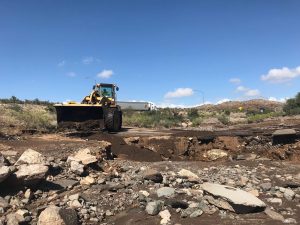 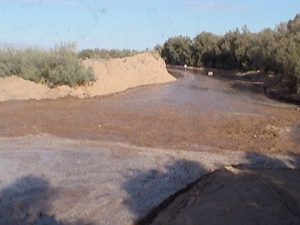