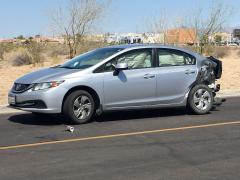 BULLHEAD CITY–The driver of a reported stolen Honda Civic led three law enforcement agencies on a pursuit before crashing at the intersection of Highway 95 and Riverview Drive in Bullhead City.

Bullhead City Police Sgt. Scott Gillman said their agency was advised by the San Bernardino County Sheriff’s Office they were in pursuit of a reported stolen silver Honda Civic out of Needles. The vehicle was traveling northbound Highway 95 and crossed into city limits.

“We have certain criteria to meet before we engage in a pursuit and in this particular case our officers set up in the southside of the city limits. They observed the vehicle failing to yield to SBCSO and Mohave County Sheriff deputies,” said Gillman. “Our supervisor advised our officers that we were not going to engage in the pursuit of this car, likely because of the speeds involved and the dangers that are presented to our citizens.”

The stolen vehicle continued northbound into Bullhead City limits at a high rate of speed before colliding with a maroon passenger vehicle at Riverview Drive and Highway 95.

The suspect, Gillman said, did not remain at the accident and traveled westbound Riverview Drive before stopping near Kaibab Drive. The driver reportedly began to flee the scene on foot, but was detained by witnesses to the accident, he said.

The name of the suspect is not being released by police at this time.

“We are still in the preliminary stages of the investigation and can not answer if alcohol was involved, however there was an open container found outside the vehicle,” Gillman said.

Gillman did say there were injuries involved at the crash site, but he did not know the extent of those at press time. 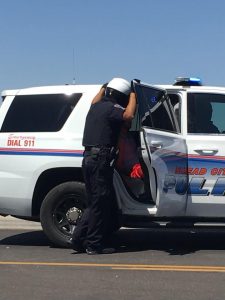 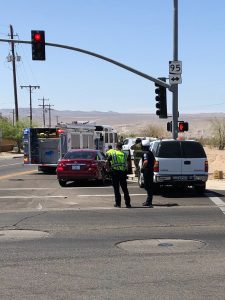 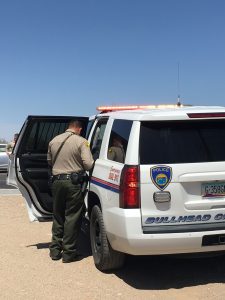