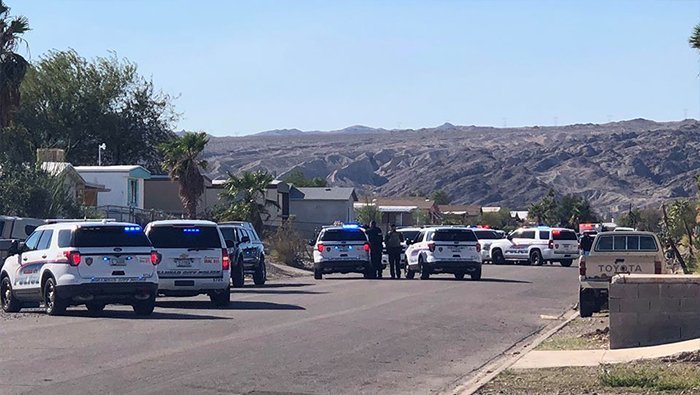 BULLHEAD CITY–Several police and medical personnel swarmed a Bullhead City neighborhood Tuesday afternoon after a call came into 911 reporting a 9-year-old boy had been shot by his father in the 800 block of Holly Street.

Bullhead City Police Lt. Arvisu told The Bee, that the reports of a shooting and hostage situation were false.

“We got a report of a shooting that occurred and we came to this residence off Holly Street and determined that nothing had really happened. The person that called it in linked up with our detectives. The detectives are following up with that person trying to figure out exactly what type of the report was and why she made it and whatever they find out.”

Additional information related to this incident will be released by the police public information officer.

The call came into Bullhead City Police Department a little before 1 p.m. where a woman was reporting her husband had just shot their nine-year-old son and holding hostage a two-year-old boy. Police immediately responded, along with medical, and staged around the Holly Street residence. A short time after, police retreated from the scene after learning the incident was false.

No injuries were reported when police and medical were able to make contact with the homeowner.

It is not known why the report was made, but the case remains under police investigation.