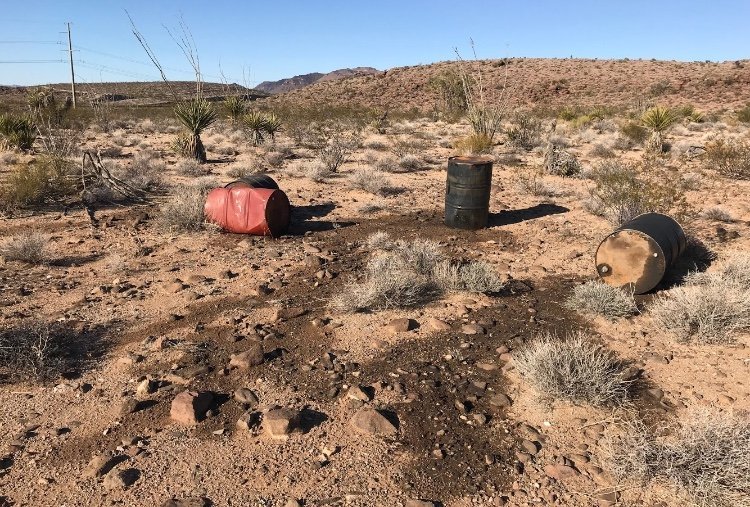 KINGMAN – Tires and oil drums littered the desert landscape after a local photographer stumbled upon the dump site Saturday night.

“This is why we can’t have nice things.”

Cliché as it sounds, that’s the thought video/photographer Charles Black had after stumbling upon the alleged illegal dumping ground Saturday in the desert just south of Kingman.

“I was livid,” he said, of the area he regularly uses for movie and photo shoots.

The site was littered with more than 100 tires from cars, trucks and race cars. Black said the tires looked like they were recently changed from their host vehicles and disposed of in the desert on Bureau of Land Management Road 7142 – not far from the railroad underpass leading to the dirt roads behind NUCOR Steel Kingman plant – and about a quarter-mile from Frontage Road adjacent to Interstate 40.

It’s not exactly a covert hiding spot, said Black, but quick enough to dump the trash and get out before being spotted.

What really got Black fired up was the return trip the following day to see the pile in broad daylight.

Black got a solid count of the tires and immediately discovered four 55-gallon drums of used motor oil, much of it spilling into the soil.

Black, who knows the terrain, said the garbage is all new.

“I was out here about three weeks ago and none of this was here,” he said.

Due to the assortment of different tires and the lack of decay on the rubber, some of which looked as if they’d never been on the road, Black thinks the dumping may have been done by a used car dealership or mechanic shop pocketing the disposal fees.

One tire was observed to still have chalk marks that looked new, while others looked like they could be put back on a car without the owner knowing they’d been changed.

Black is a drone pilot licensed by the Federal Aviation Administration and a United StatesArmy veteran who is well-aware of privileges getting taken away when people engage in illegal activities.

“This will ruin in for the majority of people who take care of the place,” he said.

Reports of the finding has since been made to the Mohave County Environmental Rural Clean-up Enforcement (ERASE), the BLM and Environmental Protection Agency through  social media and email.

Black made a YouTube video to show the scab on the county’s landscape.

“If someone is dumping stuff here, another person will come along and get the idea that it’s acceptable to keep doing this,” he said. “The BLM is always looking for reasons to shut these roads down. This supports their reasons.”

Black uses the area to shoot movies and music videos and often has to crop in from wide shots to hide the sight of litter in the desert. He has the same feeling of hopelessness as many off-roaders, equestrians and other nature enthusiasts exploring the county have when it comes to enforcement.

To see a video of the site and Black’s response, go to https://www.youtube.com/watch?v=RFfnf4uIX8s&fbclid=IwAR0GbR3RbAOWvH4aj4-Ds-4ptysddO4eFficoq8w6kkax_4IpJgwtuSuHrs. 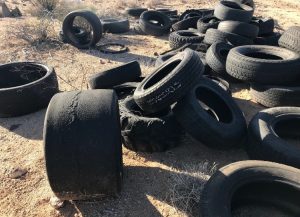