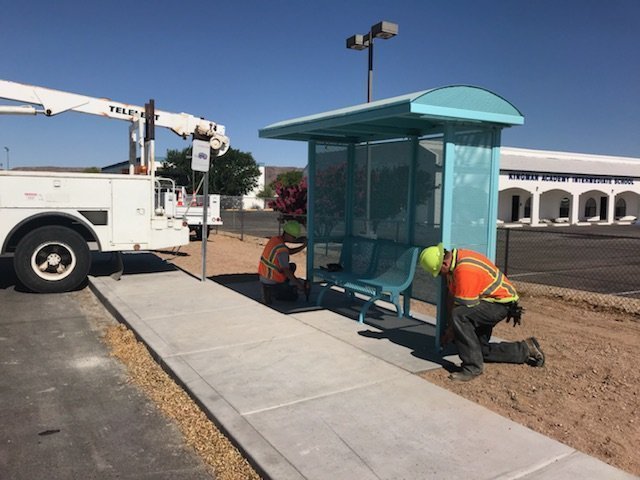 The shelters will offer much needed shade and cover to KART riders who often sit on the ground or sidewalk or stand while baking in the summer heatand pelted by rain during storms.

KART Supt. Sheri Furr said new shelters went up Tuesday. A concrete slab at one KART site still needs to be modified to support a shelter, she added.

The following areas now have shelters:

Shelters have been up at the main KART hubs at Walmart and downtown at Andy Devine Avenue and Third Street.

Others protect riders at smaller stops around town. Between the shade housings and bike lanes, Kingman continues to progress.

According to the City of Kingman website, KART operates four fixed routes, traveling approximately 190,000 miles annually and providing 7,000 to 10,000 passenger trips each month.

Plans for route expansion to the Kingman Airport are in the works.

The new shelters came courtesy of the now defunct Lake Havasu City public transit program that was scrapped due to a population and funding requirement.

Furr said sites on Mohave County roads on the outskirts of Kingman were considered, but nixed until the county could provide the appropriate funding.