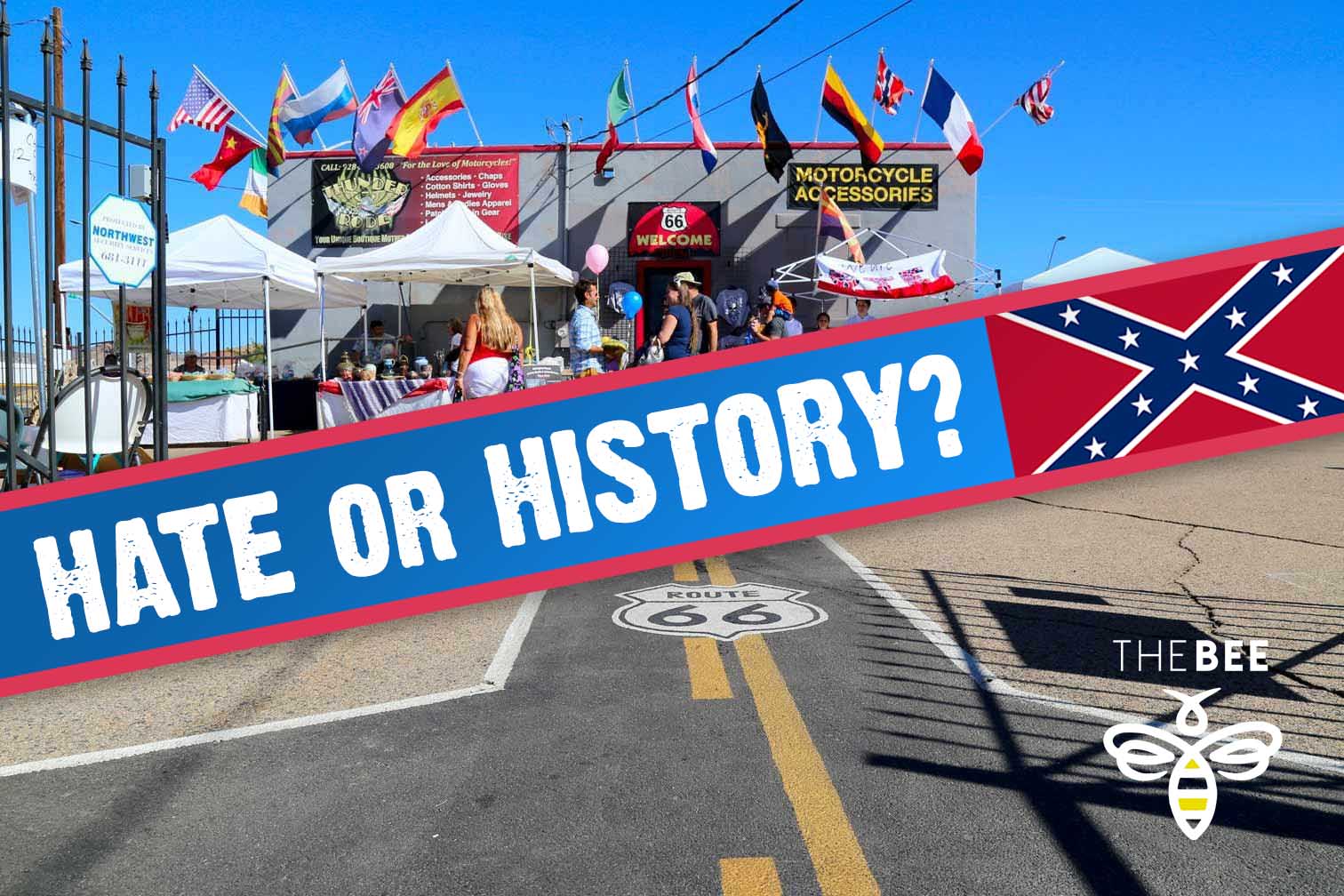 KINGMAN, ARIZONA – In recent news there has been much controversy regarding the request of venue change for the Farmers Market.  At the root of the issue is the flying of the Confederate flag that has been on display and for sale at Thunder Rode at the corner of Beale Street and 1st.  Is the symbolism behind the flag Hate or History?  Read below as Jack Alexander, proprietor of Thunder Rode and host of the Kingman Farmers Market for the last three years airs his opinion.

Although I doubt you will publish this information, I will give you the story anyway – I think it should be published. As you know, several weeks back there was a spoof done here in Kingman in front of a small crowd of Kingman residents by Sacha Baron Cohen, apparently a fairly well know spoof reporter, wherein he proposed that Kingman was about to become the recipient of the largest mosque in the world outside of Mecca. I did not learn about this until last Tuesday, Aug 7, I had not seen the video, knew nothing about it and have barely heard of this Sacha Baron Cohen other than that he had spoofed Sheriff Joe and Sarah Palin.

That all being said Tuesday morning a customer came into my shop, the Thunder-Rode motorcycle accessories shop at the corner of First and Beale behind Mr. D’z and told me of a “racial“ meeting that was held at a church (which one, unknown) in Kingman Monday night August 6. At that meeting there were some disparaging comments about Thunder-Rode because there is (was) a Confederate battle flag on our fence. We sell Confederate battle flags to anyone who wants one. I did not think much about that other than to feel sad for the woman who spoke negatively about us because she clearly is uneducated as to the inception, founding and meaning of the Confederate battle flag. Nor, has she ever come into our shop to present her side of the story and/or the reason for her disparaging comments directed at our business. The article is in the Bee Newspaper, which addressed this meeting and was posted on the Bee’s Facebook page.

Wednesday I was informed by the president of the Kingman farmers market that there would be some people (Anna Fox Ryan and Paul Gaines) at the KFM directors meeting that evening, last Wednesday, Aug 8, to speak in opposition to the Kingman Farmers Market in the Thunder-Rode parking lot because of the Confederate battle flag being on our fence. It has been held, free of charge by Thunder-Rode, for the last three years. The Kingman Farmers Market has been doing very well, attracting 400 to 800 visitors every week since inception. For me, this revelation and the petition referenced below, were the first indications that I had heard that there was any opposition to the Farmers Market being located in the Thunder-Rode parking lot and a complete shock the opposition was based on a flag on our fence.

There was a lot of discussion, but not a lot of clarity, there was even a representation that the new City Council Manager, Mr. Ron Foggin, had contacted one of our board of director members and offered to provide the Locomotive Park to the Kingman Farmers Market at no cost. The meeting was adjourned and that was it – for the moment. There, of course, would be some follow up regarding the statement about the City Council approving the use of Locomotive Park free and/or the moving of the Farmers Market to Locomotive Park simply because a handful of people don’t like the Confederate Battle Flag.

I have also learned that on a website called change.org, a petition was started and posted by one Julya Carey in which, as the petitioner makes clear, the reason for the petition to have the Farmers Market moved out of the Thunder-Rode parking lot and into Locomotive Park, was because of the Confederate Battle Flag on our fence. That, in and of itself, was shock enough, since not a single member of the Board of Directors of the Kingman Farmers Market or the owner of Thunder-Rode where the market is now held had been contacted. Why would they do that? Why would they circumvent the Board Of Directors of a 501(c)(3) corporation and go to the city Council to seek the removal of the Farmers Market where it is currently located to a new location without the prior knowledge, consent and authority of the Board of Directors? Why would they do that?

This morning, August 10, when I went to the shop to open up, AntiFa had struck. Our $200 Confederate battle flag banner had been literally and forcibly ripped from the fence where it was secured with heavy duty zip ties and self tapping sheet metal screws into the fence itself. To me and to my loyal customers and the patrons of Thunder-Rode, this is clearly the work of another of the left-wing hate groups, which is out there fomenting hate speech, violence against non-conformists to their ideology and philosophy and groupthink as we have all seen in other events and locations around the country of recent date. It is hoped that the city will take note of these hate groups and prevent them from festering to the point of causing harm. It is clear that these people prefer to gather in hate groups, act violently against others, preach hate speech and groupthink over diversity, acceptance and tolerance.

How is it that a handful (the change.org website says they only have some 200+ signers, some of which are very positive about leaving the Market where it is) of people can cause such a stir in such a peaceful, quiet community? Thousands and thousands of visitors have come through and supported the Farmers Market and its vendors over the past three years. If the signers of the Julya petition represent the total of the group-think haters which make up this left-wing radical hate group, we are looking at a microscopic handful of renegades who seek, among others nationwide, to tear our country down and destroy its history. I believe that the City, our police department and its citizens need to be aware of these people.

Response from the author of the petition

In the interest of accuracy and representation, here is a timeline of recent events as I was involved in them:

Multiple members of the public have voiced concern about the location of the Kingman Farmers Market, for varying reasons from the heat to the flag potentially being perceived by some as unwelcoming.

As reflected in the meeting minutes (distributed at the August meeting) from Wednesday, July 11, 2018, a board member proposed consideration of a new market location, excerpted as follows:

[A member] brought to the group that the City of Kingman’s council members were interested in working with the market and provided an opportunity to move the market to the cooler temped and more visible location of Railroad Park. Discussion of holding a specialty market first and then investigating the possibility of moving it for future markets. … [Another member] stated he would work with the current host to investigate options of moving the market permanently.

On Tuesday, August 7, 2018, I drafted a petition to gauge community support based the above information as well as input from downtown business owners, a market vendor, and community members. The petition read as follows:

The Kingman Farmers Market’s weekly event has had immeasurable impact on our community. It has provided a place for friends and neighbors to come together and for local farmers, growers, artisans, and craftsmen to share their products.

To widen its audience, we hope that the Kingman Farmers Market will consider relocating. Locomotive Park offers an attractive environment for tourists and Mohave County locals. Logistically, the transition would be simple, as the proposed new location is near to the current spot in Kingman’s ever-growing downtown.

The Farmers Market seems to have outgrown its current location in a number of ways:

Some community members complain that the heat is overbearing, causing them to spend less time than they otherwise would or avoid the market altogether. Locomotive Park has ample shade and grass to naturally cool the event and patrons.

The available space at the current location is limited. Locomotive Park gives the market room to “grow together” with the community as they intend. This setting also encourages patrons to explore their surroundings and potentially stay longer at the market.

Finally, the Farmers Market should consider the implications of the imagery that surrounds it –specifically the confederate flag displayed prominently around the event and adjacent business. However one chooses to interpret the meaning of this symbol, it does not represent the values of community and togetherness that this event promotes by its very nature. The symbol is unrelated and outdated at best; it represents something far more sinister at worst. We would like to send a welcoming message to those who wish to attend the Kingman Farmers Market. Would not the new arch that reads “Welcome to Kingman” be a more appropriate backdrop for this event?

If the Kingman Farmers Market aims to appeal to visitors, they should strongly consider a location change to Locomotive Park.

On Wednesday, August 8, two community members attended the public meeting of the Farmers Market board to continue conversation with the board members.

The petition gathered over 221 signatures before I closed it on Friday, August 10, as discussions were planned with the Farmers Market Board.

Also, on Friday, August 10 I became aware that a sign was torn down at Thunder Rode, on the corner of Beale and 1st streets and location of the Kingman Farmers Market.

As indicated above, my written statement – directed to the Kingman Farmers Market board – gathered significant support; it does not name or implicate Jack Alexander or Thunder Rode, nor does it suggest removal of the flag in any way. It certainly does not suggest violence or hatred.

The actions of the individual or individuals who removed the flag have tarnished my name and those of others mentioned publicly. However, I refuse to accept my labeling as a member of a “radical hate group,” and the accusation of “fomenting hate speech and violence against others.” I have not committed or encouraged any such acts. I simply created a written petition based on input from community stakeholders, including citizens with direct involvement with the market.

The writing and publication of Jack Alexander’s statement constitutes defamation of my name and character.