KINGMAN – Gathering of the Faithful and Faithless in Kingman 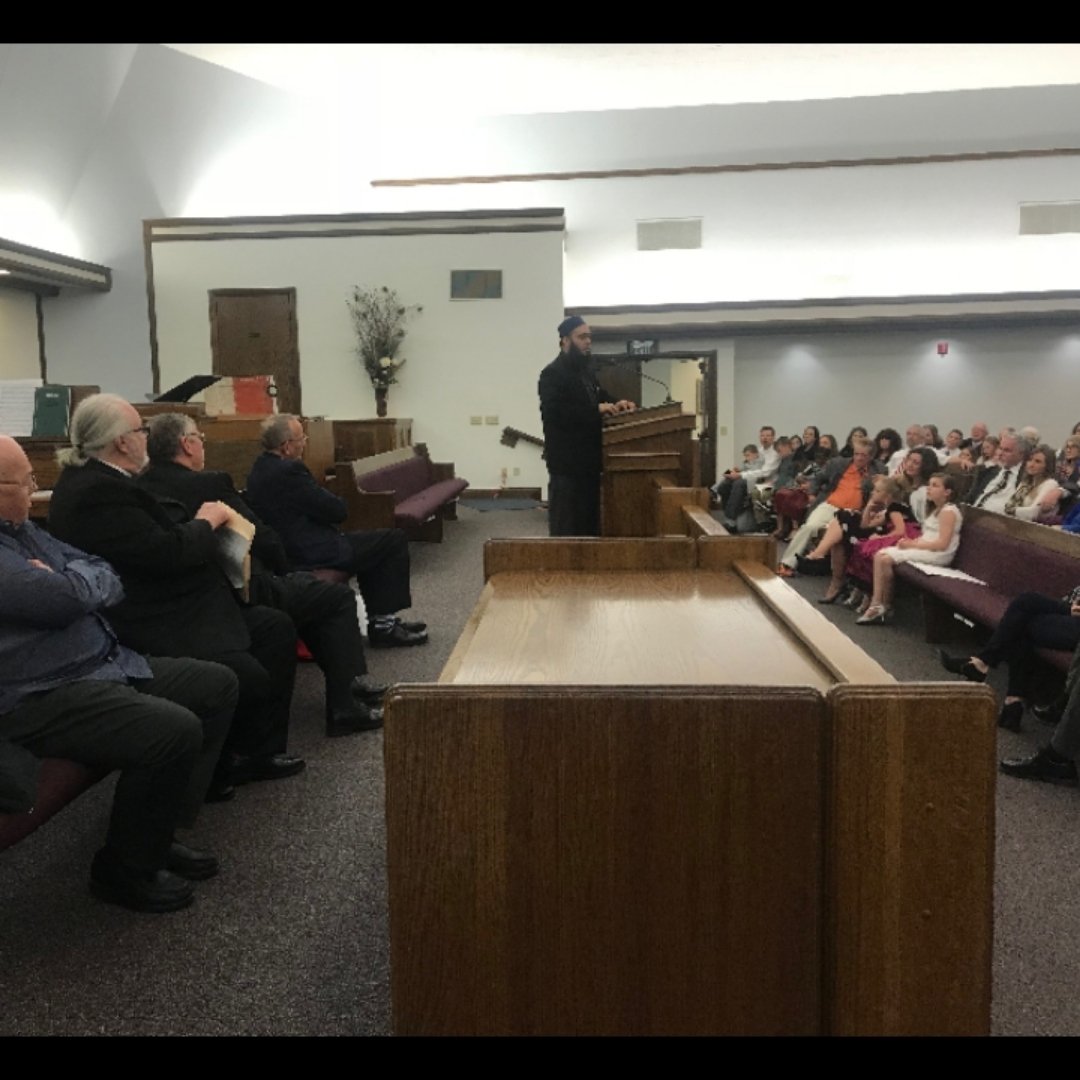 Imam Umar Farooq Mahmood (at the pulpit) was joined by KUPA leaders (left to right) Rev. Ray Christenson, Father Philip Shaw, Father Leonard Walker and LDS Stake President Vance Miller.
KINGMAN – A bishop, priest, pastor, imam and stake president walk into a Mormon Church.
About 150 hundred people of various faiths (and some of no religious affiliation) were waiting for them to speak.
The rabbi, Mindie Snyder, was snowed in at her Flagstaff residency. Safety trumped speeches.
The punchline is that those attending the Kingman Unified Pastoral Association’s bi-annual get together Sunday night at The Church of Latter Day Saints on Eastern Avenue patiently listened and learned.
KUPA is a group of religious leaders from Kingman and beyond and hosts forums at least twice a year. The group includes Rabbi Mindie Snyder, Father Leonard Walker, Stake President Vance Miller, Rev. Don Hegeman, Father Philip Shaw, Imam Umar Farooq Mahmood, Rev. Ray Christenson and U.S. Air Force Chaplain Paul Pitts. Pitts and Hegeman were also not present due to scheduling conflicts.
They addressed topics such as antisemitism, Islamophobia, homophobia, xenophobia, white nationalism and conservative Christian nationalism. Relevant current events like the debate over a border wall and spike in hate crimes since the 2016 election were worked into the conversation.
“Xenophobia makes no sense today,” Shaw said. “Most of us are of European decent, came to a new land and now we’re scared of other people coming here?”
The lack of understanding other cultures and beliefs is another message that KUPA leaders hit hard on.
“Ignorance is the breeding ground of fear,” Walker said. “Knowledge overcomes hate.”
Shaw read a statement from Snyder, who pointed out how racism and anti-Semitism often are the products of their environments.
“It’s not about the failures of the Jews,” she wrote. “It’s about the failures of themselves.”
Retired Pastor Christensen gave a lengthy speech on white Christian nationalism and the need for separation of church and state.
“We’re all human beings,” he said. “Sometimes we’re sacred that our way of thinking is the only way of thinking. The more we learn about each other, the more we accept each other”
The meeting lasted a bit more than an hour and was opened to a question and answer session.
There were no questions, but rather comments.
“I think this is one of the biggest blessings we’ve had had in a while,” said attendee Ingrid Swanson.
Mark Nisski, who has started his own group tackling the topic of religion (or lack thereof) enjoyed the interfaith experience.
“I applaud and wholeheartedly support interfaith gatherings where issues and topics that cross all lines can be discussed with compassion and openness,” he said. “Our participants did a spectacular job bringing relevant, and timely issues to the forefront of the public discourse.
He would like to see a secular representative at future KUPA meetings.
Nisski founded the Kingman Freethinkers Group which consists of atheists, agnostics and secular humanists. They had their first official meeting at the Mohave County Library Kingman Branch Tuesday night.

“Many like-minded individuals gathered and found community,” he said.

Their next meeting will be March 14, or Pi Day and physicist Albert Einstein’s birthday, both unofficial secular holidays.

While the KUPA meeting and potluck faced a limited audience due to winter weather, Shaw was impressed with the turnout.

Shah Salim, originally from Pakistan and Kingman resident of 40 years, agreed.
“I wish meetings like this would happen all over the United States,” he said.

Story and Photo by: Aaron Ricca