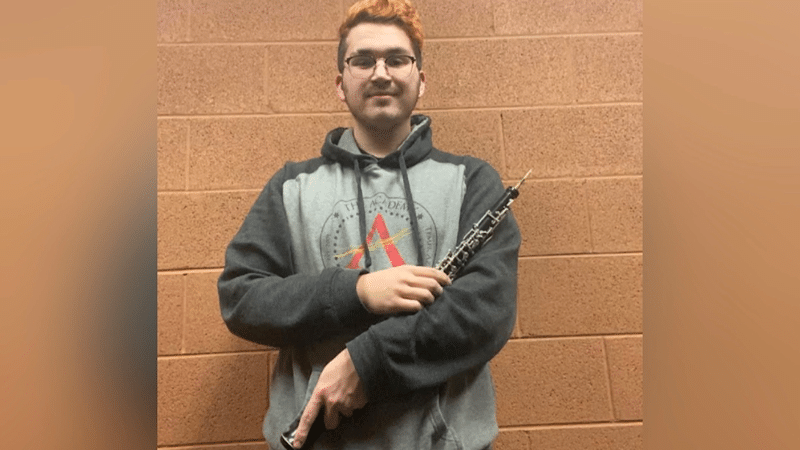 Kingman High School Sean Hernandez was selected by audition for the 2022 Arizona All-State Honor Band. Nearly 700 excelling high school instrumental musicians auditioned for the prestigious ensemble in March during live auditions held at Mountain Pointe High School in Phoenix. All auditioners were required to first pass through regional tryouts, performing in area honor ensembles in February 2022. Sean earned a second chair placement in the state honor band against 30 other oboists from across Arizona. The rigor of musicianship was highly competitive.
Joining the Kingman Unified School District #20 band program early on, Sean experienced many musical achievements throughout his school band career earning individual & group awards with the Kingman Middle & High School Bands. As Drum Major, Sean has led the award-winning Kingman High School Bulldog Marching Band for the past two years, and performs with KUSD’s Color Guard troop. From Superior ratings at Solo & Ensemble Festivals to regional honor band placements to the marching field, Sean is no stranger to success.
Sean, a senior at KHS, has chosen to pursue a degree in music. He was recently accepted into the Northern Arizona University’s School of Music for Fall 2022 where he will continue performing and composing music. Sean conveyed, “Music is something so organic that most of the world is missing out on. It’s always a goal of mine to find the deeper meaning and emotion in a piece so I cannot only bring out the feelings in me, but in others.”
Kingman High School Band Director, Michael Schreiber, contributes Sean’s mastery of the musical language to his personal drive and determination. “Sean brings expression and meaning to the black dots on the page, bringing listeners into his musical conversation with the utmost passion,” said Julie Gragg, KUSD Music Coordinator and former middle school director.
100 members of the 2022 Arizona All-State Band will gather in Flagstaff at Northern Arizona University to rehearse April 7-9. The state’s best band, choir & orchestra high school students will culminate the experience by performing in NAU’s Ardrey Memorial Auditorium for a 1,330 capacity audience on Saturday, April 9, 2022.