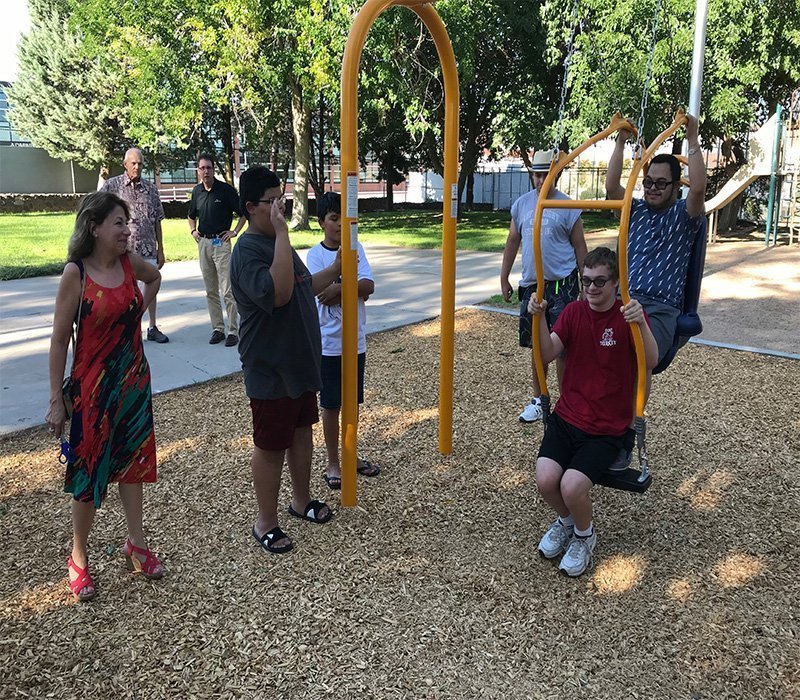 KINGMAN – At first sight, it’s weird to figure out.

After a few rides, the physics and purpose of Metcalfe Park’s “Expression Swing” sink in.

The efforts of the Kingman Route 66 Rotary Club in cahoots with the Mohave County Special Needs Advocacy Coalition and M.I.K.I.D., raised $4,000 and with the efforts of City of Kingman Parks and Recreation, installed a swing that will accommodate children with disabilities and whomever counterparts wish to swing along.

To describe it as a tandem-type mechanism doesn’t quite paint the picture. The swing allows a child with disabilities to sway, while an adult or sibling sits with them, allowing gravity to take over and a nice, easy ride to ensue.
“The best part about the swing is that it doesn’t exclude children with special needs,” said Susan Williams, Kingman Route 66 Rotary Club President.

Concrete drainage tubes that fulfilled the imagination and helped expand the energy of Kingman kids from many generations before stood in the area where the swing is now. According to City of Kingman Parks Director Mike Meersman, those tubes were falling apart, seen their day in the sun and had to be removed.

About 50 people, adults and children alike, made showed up to see the new addition. Mayor Monica Gates and Vice Mayor Miles were on hand to see another addition to city parks.

Williams said the Rotary Club scouted out other city parks for a place to put the swing but settled on Metcalfe Park for its calm atmosphere. Benches will eventually be put near the swing.