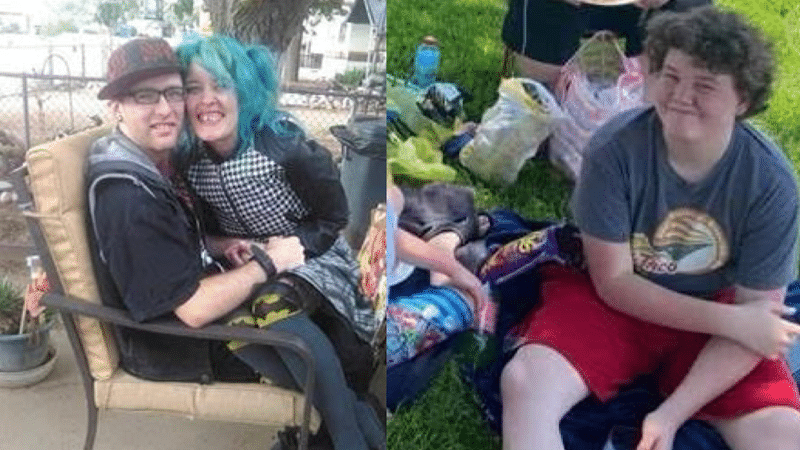 The Kingman Police Department is seeking the public’s assistance in locating a missing family. Married couple, Erika Irene Allison, 36, and Joshua Robert Martinez, 30, left to go camping with son, Psymon J. Kelly, 17, for 7-10 days on Saturday, September 11th.  They left possibly in the afternoon time frame to go camping at Katherine’s Landing in the Bullhead City area. Erika Allison was driving a four-door grey 2005 Toyota Corolla bearing Arizona wheel chair plate # GAC93.  The vehicle was last seen leaving a residence in the 2400 block of Karen Ave. with a king-sized memory foam mattress strapped to the roof.  They also had two dogs with them described as a female miniature pinscher chihuahua mix black and white in color and a large male dog, unknown breed, tan in color.

Erika Irene Allison, 36 is a white female, 5’3”, approximately 115 pounds, with brown hair and brown eyes.  Allison recently shaved her head. It is unknown what she was last wearing.

Joshua Robert Martinez, 30, is a white male, 5’5”, approximately 120-130 pounds, with brown hair, green eyes. Martinez recently shave his head. It is unknown what he was last wearing. Martinez takes medication for a disability, but left it at the residence.

When they did not return after 14 days, family members reportedly contacted the National Parks Service. National Park Service Park Rangers searched the Katherine’s Landing area for the vehicle or missing family with no contact.  Members of their family attempted to locate Allison, Martinez, or Kelly at Katherine’s Landing, Princess Cove, areas of Golden Valley, Oatman Rd, and along the Colorado River in the Bullhead City area. Martinez’s mother contacted the Kingman Police Department on Monday, September 27th to report Martinez, Allison and Kelly as missing.

The Kingman Police Department issued an “Attempt to Locate” to the Mohave County agencies for the missing family or their vehicle. Investigators determined that they left without a cell phone or without Martinez’s medication.  Allison, Martinez, and Kelly were entered as Missing Persons in the National Crime Information Center.

Anyone who has seen Erika Allison, Joshua Martinez, Psymon Kelly, their vehicle or has information of their whereabouts is urged to contact the Kingman Police Department by calling 928-753-2191.