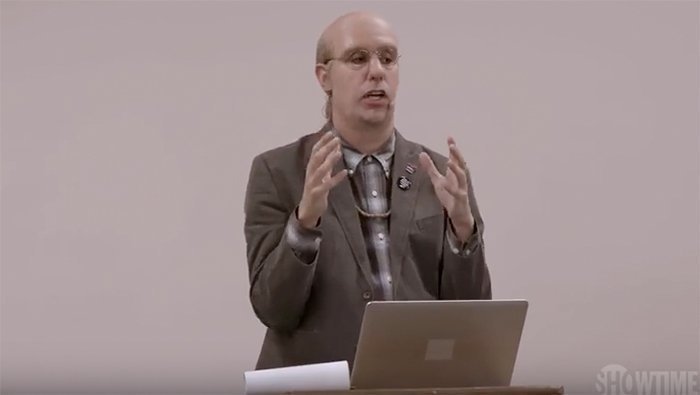 MOHAVE COUNTY–Earlier this year, a group from Kingman was reportedly paid to attend a focus group in Bullhead City where it was revealed a $385 million dollar mosque was being built in the Safeway center in Bullhead City.
However, those reports were found to be untrue after it was confirmed by city officials and the owner of the property that no such sale was happening.
Further investigation showed the focus group was hosted by a film crew out of Los Angeles, California.
It was not known what show the unbeknownst attendees would be appearing on until Sunday night when Sacha Baron Cohen’s “Who is America” appeared on Showtime.
Cohen appeared in disguise as ultra-liberal Dr. Nira Cain-N’Degeocello and proceeded to conduct a “town hall meeting” in Bullhead City.
The Arizona Republic reports Cohen told the assembled crowd that an exciting economic opportunity was coming to the place he called, in the introduction, “home of civil-rights activist Timothy McVeigh.”
In the show, it reportedly depicts the crowd as excitable until the project was revealed to be a mosque, which would become the largest outside the Middle East.
A short clip promoting the show on YouTube shows the “focus group” meeting and Cohen in his disguise.
The reaction of the attendees is what has Kingman residents up in arms.
“We are all not like that,” said one resident on a Facebook group page. “This does not show the good side of Kingman.”
Attendees reportedly made racial remarks in reference to the possibility of a mosque being built in downtown Bullhead City.

“We don’t want that (expletive) here,” said one man.

The show is reportedly suppose to be a parody and Cohen’s objective is to record the responses of American’s when faced with various issues.

Former presidential candidate Sarah Palin took to her Facebook and slammed Cohen for posing to be a disabled veteran in an interview with Palin and her daughter, Bristol.

The show airs on Showtime on Sunday nights.