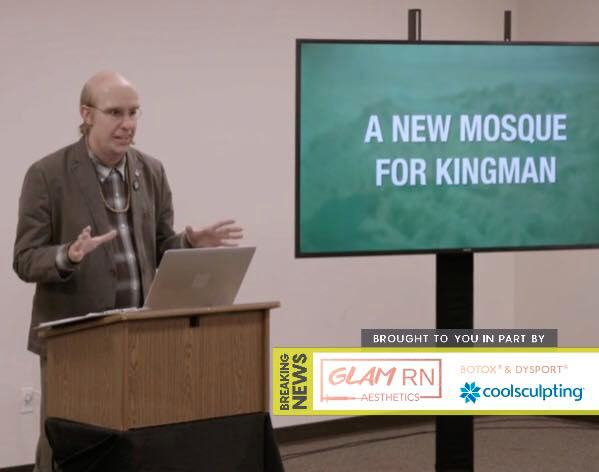 Cohen, known for playing characters in interviews and duping celebrities, politicians and plain-Jane people on the street, took on the personality of Dr. Nira Cain-N’Degeocello and managed to stoke the fire of racism/xenophobia in the county. Locals aren’t pleased.

The video was shot in Bullhead City in December under the pretense of a study group.

According to Kingman resident Venessa Mudge who was part of the interview, the group was bussed down from Kingman to Bullhead City and had no idea what they were getting into.

“We were actually led to believe that the focus group was going to be aimed at growth in our community through businesses. The advertisement on Facebook stated a similar subject,” she said. “The survey we took was all about what we thought would help grow our community through industry. What kind of shops and products we thought would help bring revenue, etc. (There wasn’t) one question about religion or culture differences.”

Mudge didn’t see the video until Monday afternoon and like many locals, she wasn’t pleased with the final cut.

“It angers me because they are portraying our community as hate-filled based off the hate in a few individual’s hearts. We are all not filled with such anger and intolerance as the documentary is trying to portray us,” she said.

Whether is was Cohen himself, or the show’s producers, they were looking for a reaction and got it. It may have backfired.

“They focused solely on the one main man who spoke the most hate in the meeting,” Mudge said. “Then focused briefly on the guy who sat in front of us whenever he spoke up. But the failed to show those of us who stood up against racism. They failed to provide the clips showing several of us laughing at Sacha’s attempt to convince the majority that it was real. Instead, they mostly focused on one single individual who made it clear that he was a racist and portrayed him as the voice of Kingman. Making our town seem like a broken down, backwoods white supremacy area when we are far from that.”

Kingman had enough bad publicity after the Oklahoma City bombing in 1995.

Timothy McVeigh (who is referenced in the Cohen sketch) lived and worked in Kingman for a while.

The World Trade Center terrorist attacks on September 11, 2001 put Kingman’s Muslim community on the crosshairs of a few fringe lunatics.

But enough is enough.

“Every city has resident voices that challenge respect and dignity for others. They are wrong and unfortunate. That was no exception on Sunday’s ‘Who Is America?’ show on Showtime in which an actor baited purported residents to vociferously oppose a fictitious, supersized mosque in our city,” said City of Kingman City Manager Ron Foggin.

Foggin continued, “Another in the audience also stated negative feelings towards African-Americans. No matter the instigation or that numerous ‘focus group’ participants don’t even live in Kingman, the show’s characterization in the words of one member of our Kingman City Council ‘broke her heart.”

Why? Because our community has made great strides to erase previous perceptions.

“We do have a mosque. We do have a robust Latino community. We do welcome tourists from all over the world, especially more and more from Asia fascinated by our Route 66 history. We do have African-Americans applying for leadership positions with the city. This is the Kingman of today, not of yesterday,” Foggin expressed.

It might be easy to laugh off what took place Sunday night on a show with very low ratings that tries to make everyone look bad. After all, New York City rejected a mosque not too many years ago and Scottsdale, Arizona once had a big debate over a Jewish Community Center.

But shrugging this off is not going to be us. We’re going to use this opportunity to keep moving our community forward with the help of many community stakeholders including the Kingman Interfaith Council.  And while we’ve been making progress the comments in the show, fairly or unfairly, show that we still have more work to do.

So here are additional steps we are going to be taking as ours is a community like too many others in America that still encounter such issues.

For the first time our City Manager will be bringing to the City Council a resolution in support of National Hispanic Heritage Month, beginning on September 15th, in honor of our significant Latino community.

Foggin said the city will be extending an invitation to Phoenix Pastor Warren Stewart to help us honor Martin Luther King Junior Day in January.  Stewart admirably and courageously led the fight for the State of Arizona to honor the fallen civil rights leader.

“We also plan to work with our Interfaith Council to develop the community’s first Diversity Commission that will be charged with expanding what our city and community does for people of all types and persuasions that have contributed, and will contribute, to this great country,” he said.

“This is the Kingman of today, and will be the one of tomorrow,” -City of Kingman, Arizona.

“Kingman is small, but it is a religiously diverse community, that has an active Kingman Interfaith Council and many religious places of worship, including a mosque. To that point, on January 16, 2018, the (Kingman City Council) unanimously adopted a proclamation declaring Interfaith Harmony Week,” Lingenfelter said via email. “The City of Kingman will continue working with the Kingman Interfaith Council on defending and responding against a program that was (A) not actually filmed in Kingman; (B) that targeted and selected individuals from Walmart’s across the region and then bused them in to a location for filming in Bullhead City; (C) that purposefully edited out the participants that called out (Cohen) on his prank; (D) and then labeled it ‘Kingman.’

“I hope (Cohen) got his ratings, as the citizens of Kingman continue to advocate and champion the giving and welcoming nature of our community to travelers and tourists both nationally and internationally; as we work to repair the damage done by the piece; and as we continue to champion the many positive strides that are being made by the City of Kingman.”

Stehly also strongly defended the integrity of Kingman’s non-racist population. She had read about the event earlier this year and saw disaster on the horizon.

“While watching the video, I experienced a mix of emotions from heartbreak to disgust. I love our town and will confidently say that this doesn’t represent us all, but what a kick in the gut to see a spotlight on the racism that does exists here,” she said.

Like just about any town in America, there are bad seeds lurking in the cracks that live to stir up trouble. With the growth and ingenuity of Kingman’s diverse population, it looks like the good will blind the bad.

“A lot of great changes have been happening in Kingman. Things that we can all be proud of,” Stehly said. “We must also make it a priority to rebuild our sense of community and acceptance.”

Screenshots of the Focus Group Advertisement on a Bullhead City Facebook page: 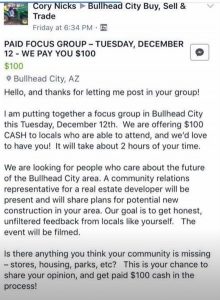 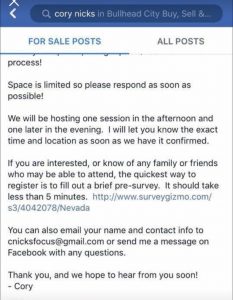 ← Prev: Bus Rider Reportedly Threatened To Kill Himself Next: No Foul Play Suspected In Body Discovery →