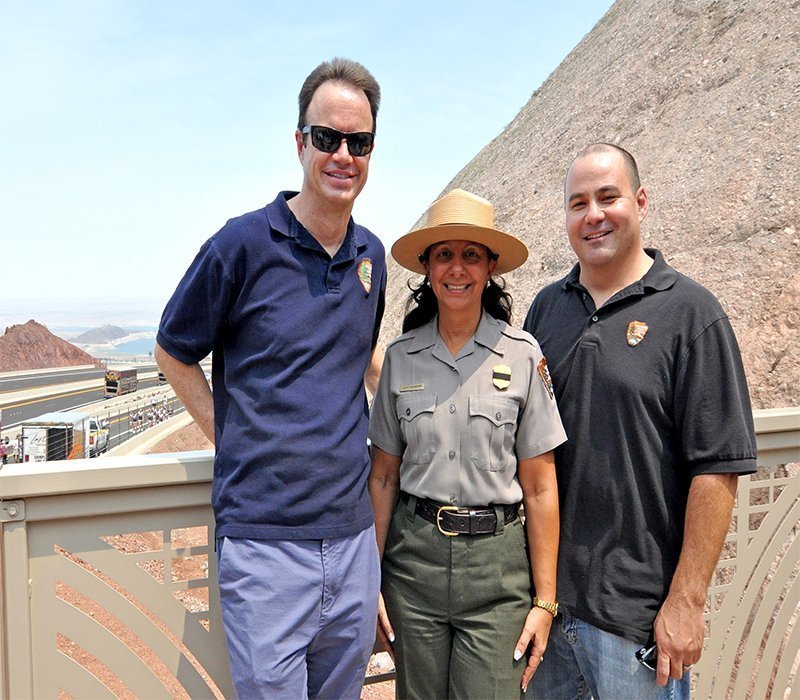 BOULDER CITY, Nevada – As desert bighorn sheep looked down from the hills and the waters of Lake Mead sparkled in the background, a portion of Interstate 11 opened Aug. 9 after a formal ceremony.

The first portion of the freeway, which will eventually span from Canada to Mexico, travels through 1.5 miles of Lake Mead National Recreation Area to the Hoover Dam.

“You don’t normally see an interstate running through a national park,” said Mike Boyles, Lake Mead lands, planning and compliance specialist. “Throughout planning and construction, we wanted to preserve all of our National Park Service values.”

Over the past 15 years, Boyles and other park staff worked with the Regional Transportation Commission of Southern Nevada, Nevada Department of Transportation and contractors to educate them about the importance of maintaining natural view sheds, wildlife migration patterns and dark night skies.

“Our overarching message was that we wanted the landscape to dominate, not the interstate,” said Boyles. “When you reach the part of the interstate located in the park, it feels like a park road, not a typical interstate.”

A major factor in achieving this goal was controlling the rock cuts to make them look like natural slopes versus engineered cuts.

“A lot of time was spent on the cuts and sculpting them to look as natural as possible – similar to outcrops,” said Toshi Yoshida, Lake Mead lands, planning and compliance specialist.

With the rock cuts came a lot of material that was scattered along the terrain to create new slopes. To restore these slopes, the park’s vegetation team salvaged native plants from the construction site and grew additional plants at the park nursery from native seeds.

By this fall, around 10,000 native plants will be replanted in the park along the I-11.

During the opening ceremony, which was attended by U.S. senators, members of congress, other elected officials and area leaders, desert bighorn sheep peered down upon the new interstate. As a matter of safety, for both drivers and the sheep, they will likely stay along the hills and off the road.

Yoshida said the new interstate has undercrossings and overcrossings that were built with wildlife in mind, along with wildlife fencing and sheep jump outs, which allow sheep to jump out of the roadway, but not into it.

Prior to construction, the park provided oversight for desert tortoise and cultural resource surveys. A prehistoric ceramic pot was located and turned over to the park and is now part of its collection.

As people travel southbound along I-11 outside the park, they will see art and sculptures, depicting the construction of the Hoover Dam. Then, just before entering the park, a panoramic view of Lake Mead appears.

People can grab a better view at the scenic overlook, where the stories of the history, wildlife and geology of the area are shared in interpretive panels.

“This project was a good partnership,” said Boyles. “The crews wanted to make sure the National Park Service approved of the design, and when you drive into the park, you can tell the difference. We reached a lot of people with our messaging.”