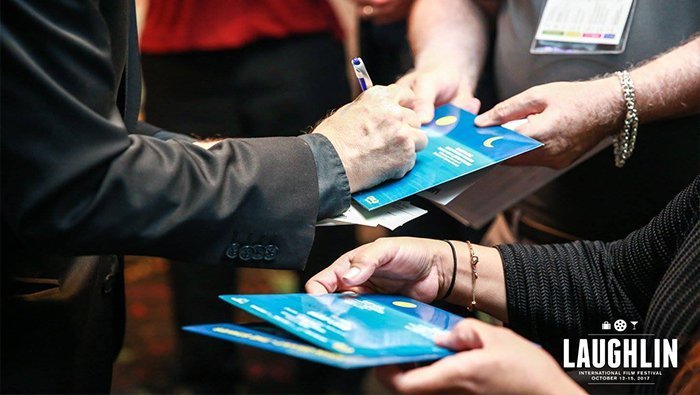 LAUGHLIN–Lights will shine and the red carpets will once again roll out for filmmakers and movie enthusiasts as they converge on the small gambling and entertainment mecca next month for the Laughlin International Film Festival.

The film festival will run from Thursday, Oct. 4 through Sunday, Oct. 7 in Laughlin.

The film festival will kickoff on Thursday night at Stadium 9 Cinemas, inside the Laughlin Outlet Center, with a red carpet premiere of the “The Holy Fail”, a multi-award winning Irish-comedy about 4 friends who rob a safe in an attempt to save a marriage. All is going great until they get caught by the nuns. The film is written, produced and directed by Owen Dara. A special question-and-answer session will follow the film with Dara, Jessica Lancaster and cast members.

“It is great to see them returning to our film festival,” said LIFF cofounder Mara Karsen. “The two have screened several films at the film festival over the past seven years and this film is just hilarious and an overall great comedy. We are so happy that it is our opening night film choice.”

Karsen said close to a 100 films will be showcased during the film festival weekend.

“We are so thrilled to bring the film festival back to the Tri-state community for a seventh year,” said Karsen.

However, getting here today has been a little bit of a roller coaster for the LIFF team.

“The first few years when we started we were building a brand,” said Karsen. “It has taken a few bumps and bruises along the way, but we are very proud of what it has become and the amazing filmmakers and volunteers who had helped us get to this milestone.”

In 2014, tragedy struck when Dave Davidson, Karsen’s partner and cofounder of LIFF, passed away unexpectedly. In 2015, Karsen, her son and third LIFF cofounder, Eric Puhm and the LIFF team celebrated the fourth anniversary in Davidson’s honor and unveiled “The Dave Davidson Big Dreams” honorary award for filmmakers. That award continues to this date.

The festival will not only feature worldwide filmmakers, but several films on the schedule were crafted by local filmmakers.

Returning filmmaker Brian Brown will screen two films, Strawberry Fields and Seasons. The latter though, said Brown, is a bit different and may not be suitable for everyone.

“Just keep an opened mind and enjoy it,” he said.

As for Seasons, the audience may not walk out of the theater with dried eyes. “It may have an emotional affect watching it. The storyline behind it shows how life changes along the way,” he said.

The film is being directed by Issac Lopez, a first for the actor who has appeared in several of Brown’s films. Brown is the owner of Desert Dream Studios in Golden Valley and director/editor for “The X-Perience Show” with The Bee. Brown has won multiple “Best Local Film” awards over the past seven years. In 2015, Brown, who was very close with Davidson, was the first recipient of the Dave Davidson Big Dreams award.

Mohave High School senior Canyon DiMare, 17, will screen his second short film, Murrder Locke and Loaded. DiMare and friend, Quincy Barham, collaborated together to write and direct the satire murder mystery film. DiMare was awarded the Harry “Bud” Holland award in 2016 for his feature film, Genome. DiMare currently shows of his film talents in a weekly community spotlight show with the City of Bullhead City.

Another local filmmaker will premiere their feature length film on Saturday, Oct. 6.

“Boonville Redemption” is a US Feature film written by Bullhead City resident Judy Belshe-Toernblom. The feature, directed by Don Schroeder, is set in the 1900’s and depicts a young girl on a path to finding her real father. The film stars Ed Asner, Diane Ladd and Pat Boone.

“The films keep getting better each year,” said Karsen. “One thing we have noticed during submission time is the films are growing and they have good storylines.”

Karsen said because of that growth, the LIFF team were able to create a special block that features good family-oriented films in the PG category.

“There is a movie for everyone,” she said.

One workshop will focus on how to use social media platforms to market films, while another will be geared for young filmmakers. For the Sunday Brunch Morning workshop, attendees will learn the tricks of the trade of the film festival circuits.

Tickets are $10 per film; $8 for seniors. Day passes are available on LIFF’s website at www.laughlinfilmfestival.com. Visit the website for more details, film block schedules, workshops and networking, after parties, and other special events planned throughout the festival weekend.